ABS Editor Blogs: a sneak peek into the minds...

If you are a reader of Art Bead Scene, you probably know that the editors here are all bead makers who make their own handcrafted beads. But you may not know that many of them have active blogs of their own! In an effort to show you a little into the worlds of each of the editors lives, here is the first in a series of sneak peeks at some of the typical personal blog entries of the editors:
Bling (Confessions of a Bead-Queen) ,

originally posted Sept 25th by Melanie at her Earthenwood Blog

Beautiful lampworked bird bead by Kim Fields of NorthFire Designs
Yesterday was a good work day. I accomplished the things I needed to get done: glazing/loading/firing a small kiln. It is cooling now so that means today is shipping day. Later I will do a big bisque, so I have to finish some beads (sanding, yuck, my least favorite part!) . I am a bit excited about this bisque (I don't say that often!) because I am firing my first round of the new tiles. And I ordered new glazes for the little jewel bubbles on the tiles, so I hope to get them by the weekend so I can do some tests. I am looking forward to finally seeing some finished results. 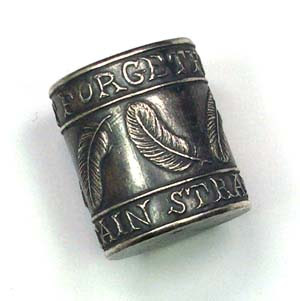 I also spent a little time stringing, although just a little, as the kiln took up most my day. And the time I did spend was sort of spinning my wheels. I have a confession to make. I am a bit intimidated by the bird bead and the silver bead above. I have two pieces in the works with them as the centerpieces. I have thought about them and have even made my own beads specifically to match them. But now I am having a hard time designing around them. I think it may be the *bling* factor. I am having a hard time getting over the fact that they were costly beads (in the over$50 range). Totally worth every penny, and more, but I am sort of pressured by that to make them into something great. I know I shouldn't think this way, yet here I am. I have no problem designing jewelry with my own beads, even though my beads are less involved and thus less expensive, but I can pack a hundred dollars of my beads into a piece and not be phased. I guess it's because I didn't shell out the bucks for my own work.
So it makes me think of all the beaders I meet at shows, who have purchased my beads in previous years. They say things like, "I got some beads from you last year and I am just hoarding them" or "i just take them out and fondle them sometimes". I think that maybe they are intimidated too! If it is not for *bling* reasons, then maybe it is for lack of confidence reasons, or a combination. I am feeling both right now. What if I can't do justice to this beautiful bead?
So I want to snap out of this mindset. Because, these items are just beads. Incredibly beautiful beads made with creativity, skill, and love, but beads nonetheless. And beads are meant to be strung, and worn. Not hoarded away and brought out occasionally to look at and touch. Beads are meant to be strung...they want to be with other beads! They want to be worn...their duty is to adorn! So I am going to finish these two pieces today, and be confident that I am doing them justice, and wear them proudly.
And you know, in the end, the greatest thing about beading for me is that it is only thread and wire and ribbon. And it can always be taken apart and you can start over. The beauty of beading is that state of flux and process. You can complete your masterpiece and then just as easily start again, with a simple snip of the scissors or wire nippers.
Today's song and video is "Bling (Confession of a King)" by the Killers. I feel like I have been slipping way into the past with my music lately, so it was time to listen to something current. I am not exactly sure what this song refers to, but I think it is about fear and breaking through to take risks, and putting life into perspective. I am posting the lyrics below the video, so I can think about it more. But there are some lines that I absolutely love, that pop into my head on occasion..I have put them in bold type. And the video was a great find...a fan video set to scenes from Harry Potter, focused on Ron Weasley. How fun!

When I offer you survival,
You say it's hard enough to live,
It's not so bad, it's not so bad
How do you know that you're right?

I awoke on the roadside,
In the land of the free ride,
And I can't pull it any longer,
The sun is beating down my neck

So I ran with the devil
Left a trail of excuses,
Like a stone on the water,
The elements decide my fate,
Watch it go..."bling".

When I offer you survival,
You say it's hard enough to live,
Don't tell me that it's over,
Stand up,
Poor and tired,
But more than this

I feel my vision slipping in and out of focus,
But I'm pushing on for that horizon,
I'm pushing on,
Now I've got the blowing wind against my face

So you sling rocks at the rip tide,
Am I wrong or am I right?
I hit the bottom with a "huh!"
Quite strange,
I get my glory in the desert rain,
Watch it go..."bling".

When I offer you survival,
You say it's hard enough to live,
And I'll tell you when it's over,
Shut up,
Poor and tired,
But more than this

It ain't hard to hold,
When it shines like gold,
You'll remember me.

Melanie Brooks Lukacs is the ceramic beadmaker of Earthenwood Studio, who blogs from her Metro Detroit, Michigan home.
Posted by melanie brooks at 11:01 AM

Email ThisBlogThis!Share to TwitterShare to FacebookShare to Pinterest
Labels: Inside the ABS