Inside the Studio :: Erin Prais-Hintz

Welcome to Inside the Studio!

Each week one of our contributors gives you a sneak peek into their studio, creative process or inspirations. We ask a related question of our readers and hope you'll leave comments! As an incentive we offer a free prize each week to bribe you to use that keyboard. The following week we choose a random winner.

So back in the dead of winter, I was sent an email from my friend Sara Oehler at Soft Flex Company asking if I would like to join them in a special collaboration with the fine folks at Beads of Courage. Of course, I said yes! If you don't know about the Beads of Courage story, please check it out here.

All I knew back in January was that I would be sent a lampwork glass bead from an artist to create what I wanted to be displayed at the Bead & Button Show in June. This lampwork bead would be rendered from a drawing by a child in the Beads of Courage program. As the main creativity sponsor, I could use any Soft Flex wire that I wanted. 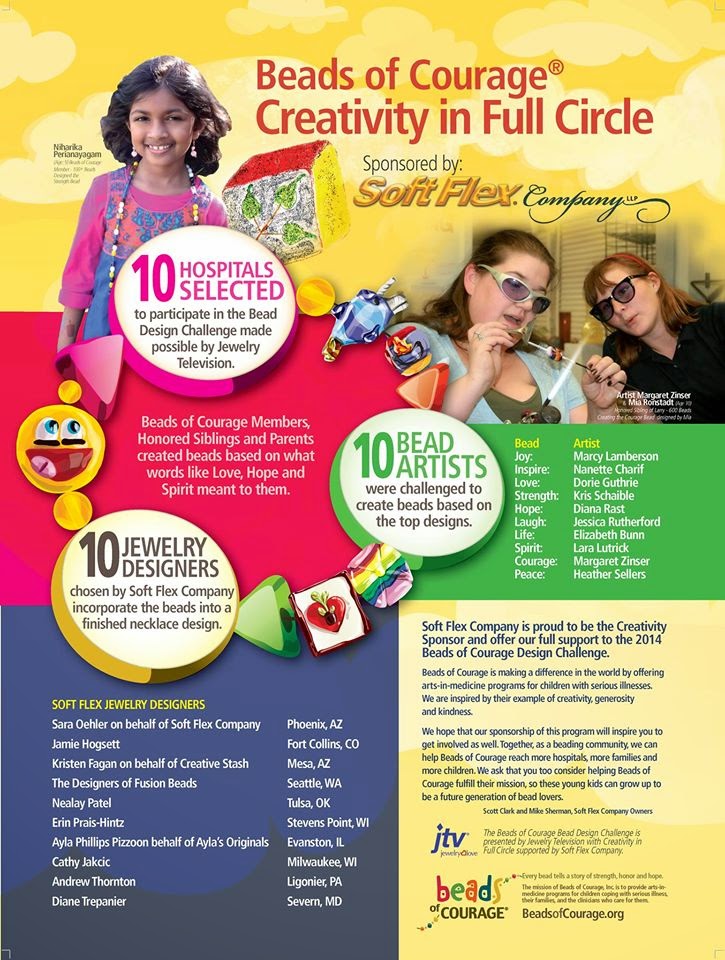 What I came to find out was that there were a total of 10 regional hospitals who participated in this program. The children were given a word to represent in their drawings. These drawings were sent to 10 select lampwork artists to create about a dozen of the beads. Some went back to the child's family, others were slated for sale and one went to a hand-picked jewelry artist to feature in a show-stopping piece of jewelry. I was one of those ten jewelry artists selected by Sara. I am so very honored to be a part of this amazing collaboration.

The beads were supposed to arrive in March and we were expected to get them back to Soft Flex by May for photographs and to be readied for their debut at a special booth at the Bead & Button Show. I didn't get my bead until late in April. That shortened the time frame a bit and also made it imperative that I have a plan since I had to turn right around and ask for exactly the wire that I would need for the project. 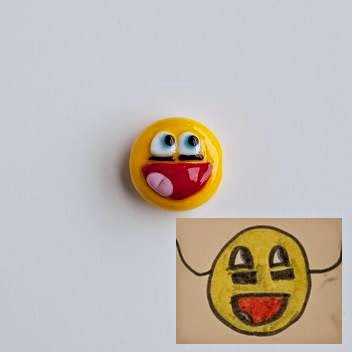 The bead I received had a card that read 'Peace' by artist Heather Sellers of Dragonfly Lampworks. The original drawing was by Josh Wheeler, honored sibling of Brendan who is in the Beads of Courage program. (You can purchase this bead and the others through the Beads of Courage site).

But I really felt that this funny little face was more about HAPPY than peace. Of course, that song by Pharrell Williams was playing when I was sketching the design. So HAPPY it is! 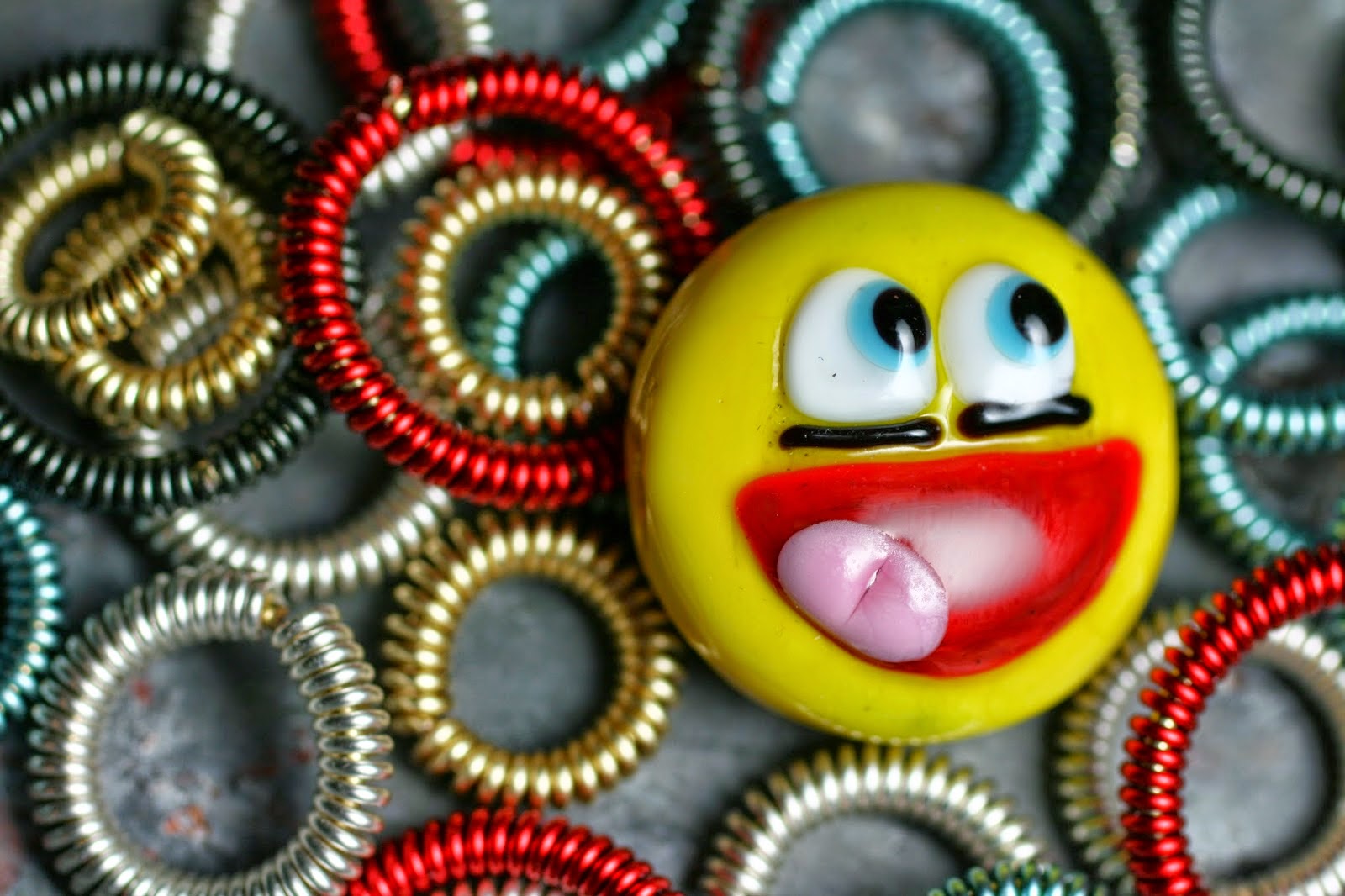 I wanted this necklace design to be fun and a bit funky to match the undeniably HAPPY bead I received to work with. Because we are doing this in collaboration with Soft Flex, we needed to use their wire as part of the design. I didn't just want to string it and forget it, I wanted their product to be integral to the piece. So I coiled and coiled and coiled and coiled colored wire in powder blue, red, gold, black and silver until my fingers were numb! 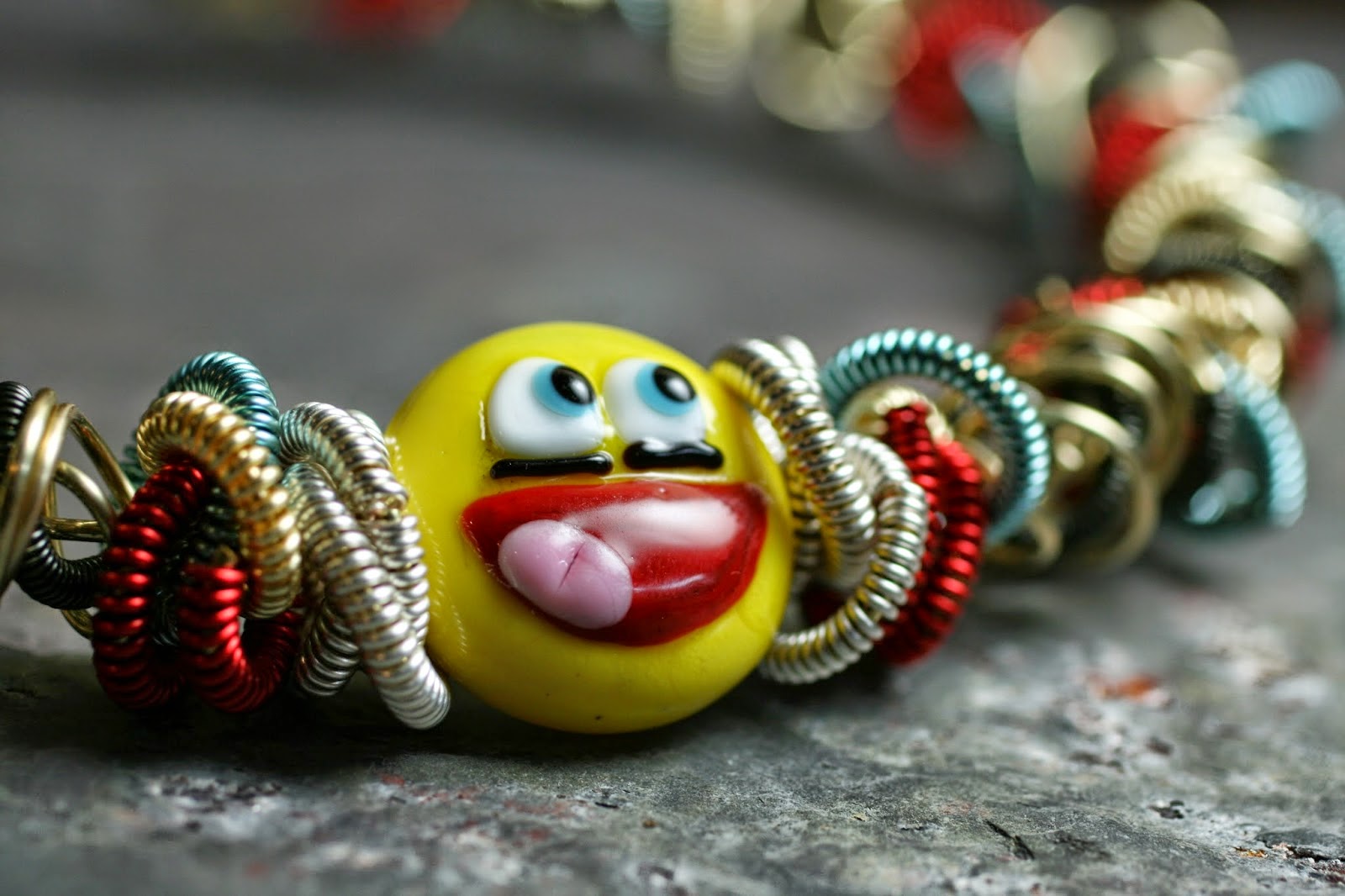 I made a lot of jump rings from those coils and created coiled love knots, something I do all the time with plain jump rings. I love the texture that this provides as well as the cushion for the glass bead. I also made some twisty free-form beads with coiled cores that were all strung on a solid wire core for stability. 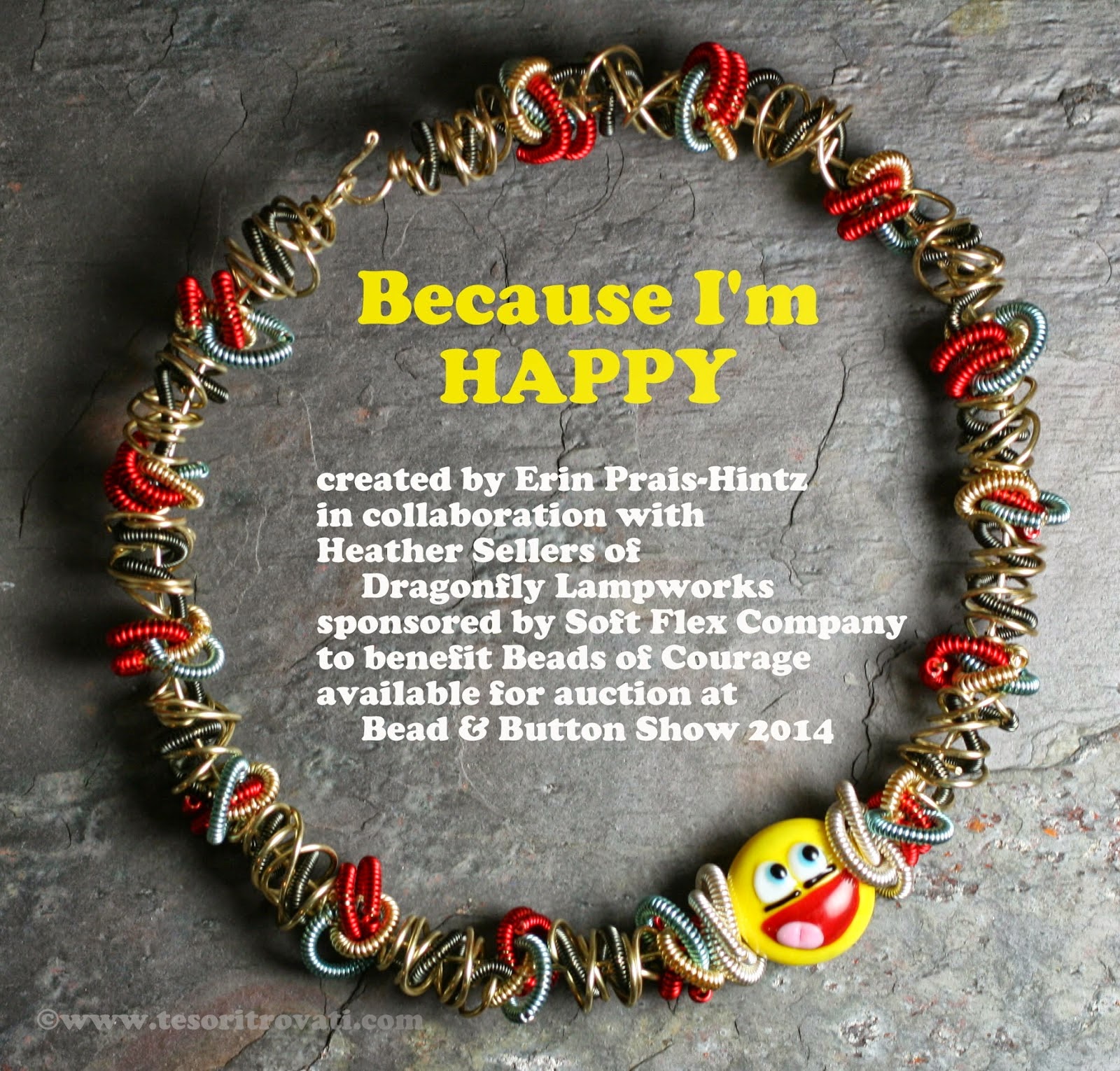 The result is a truly off-beat statement piece that makes me HAPPY to look at! Seriously, you could not be un-HAPPY if you were wearing it. You would look foolish with a frown on your face and this on your neck! 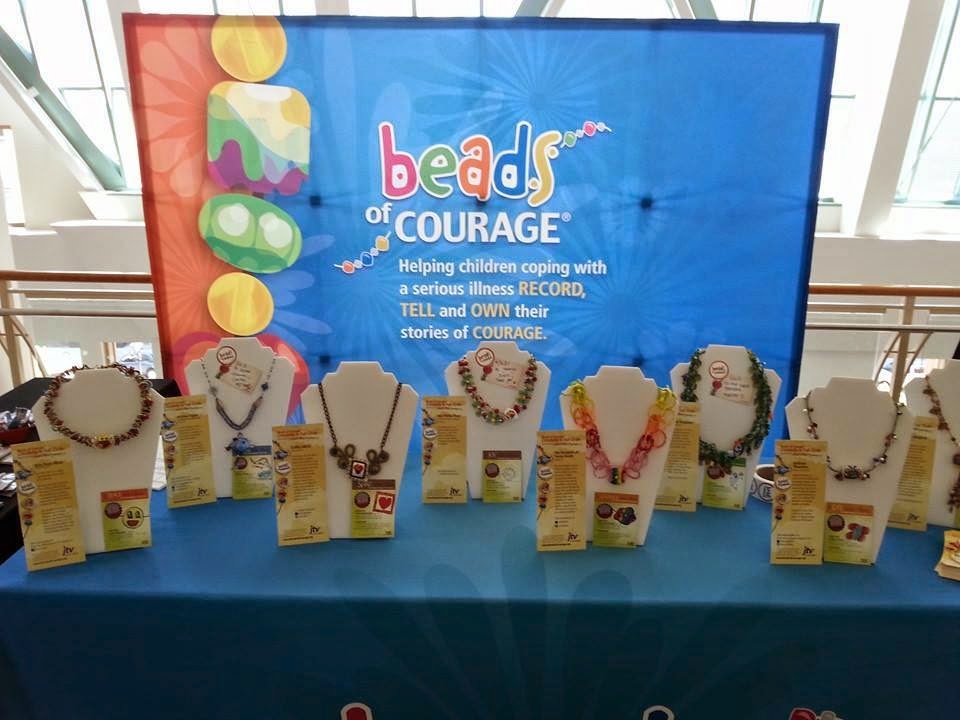 At the Bead & Button Show I quickly found their booth out in the main hallway. I was delighted to walk up and see my creation sitting there with all those other talented artists' work and meet the founder of Beads of Courage, Jean Baruch. 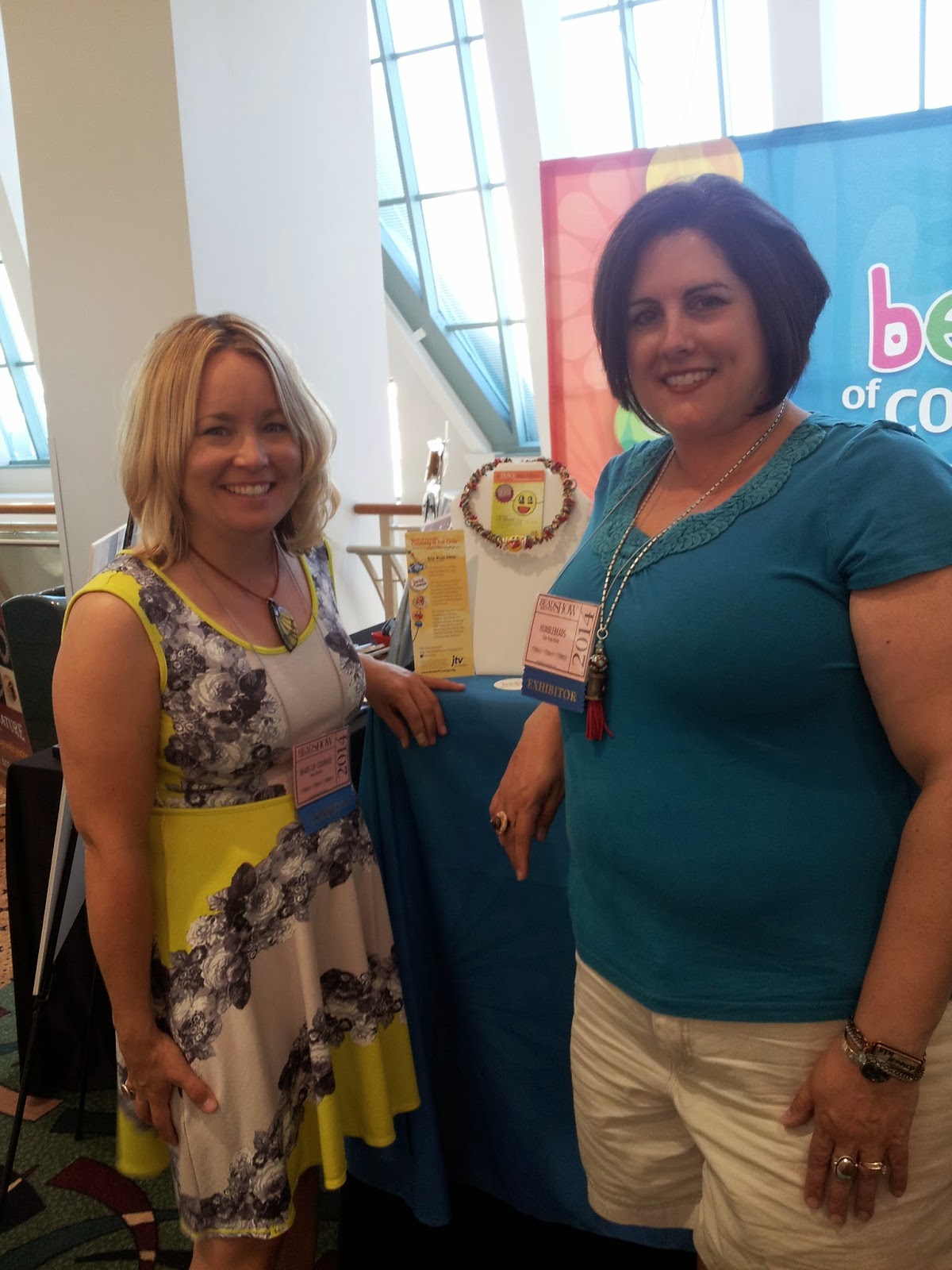 Isn't she the cutest little sprite of a thing?! She is so positive and warm and welcoming. I felt like we had known each other for a long time after only being there for a few minutes. 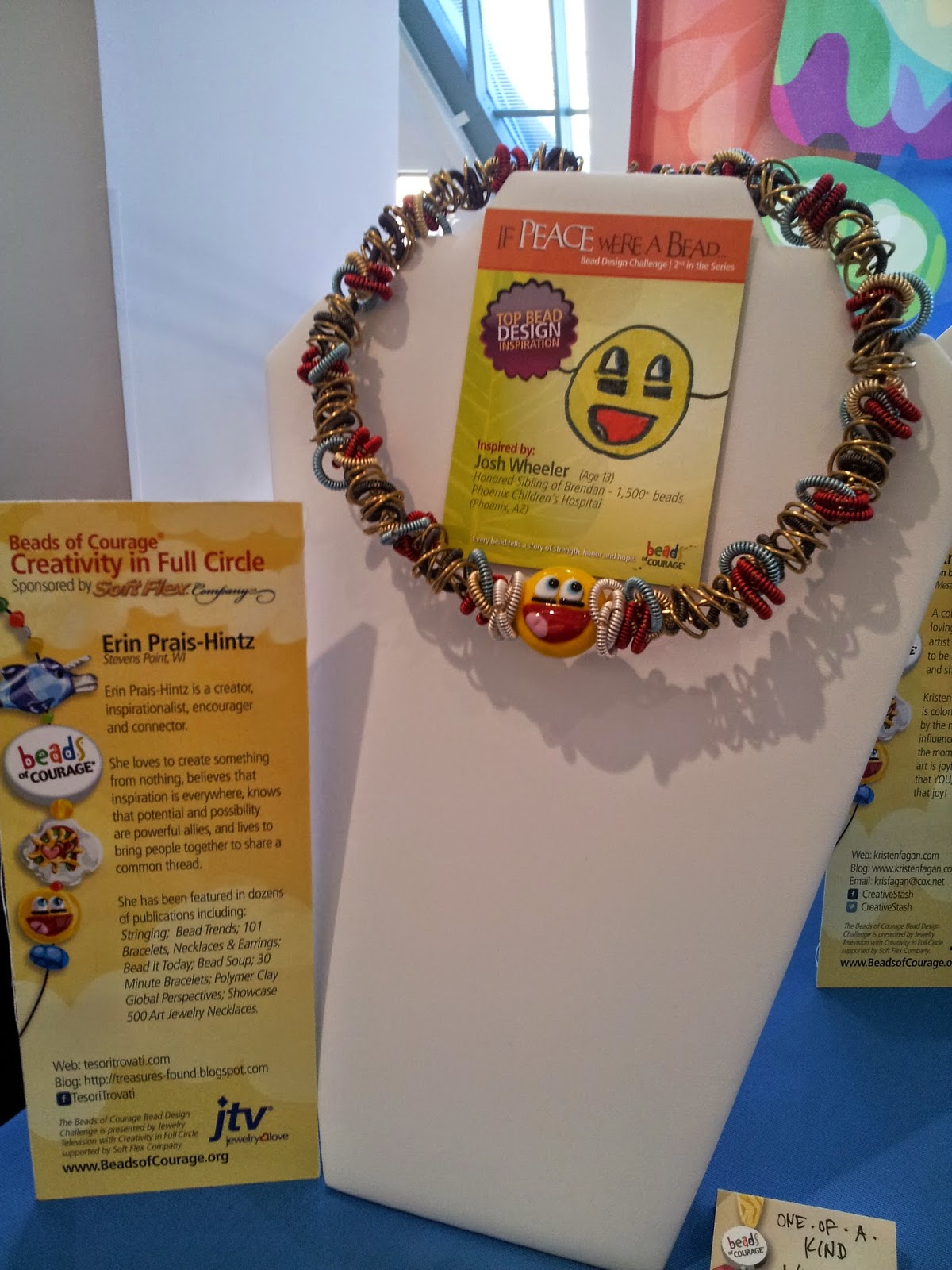 Each of the pieces were displayed with a picture of the original drawing and a nice bio card. There is a connection to Jewelry Television with this project and I understand that a commemorative book is in the works as well as an airing on the JTV in the fall. They usually cast all the glass beads in pewter for a smaller, more affordable bead that can be used by the children in the program as well. I will be anxiously watching for that!


Throughout the Bead & Button Show they were accepting a $100 donation to the Beads of Courage organization to purchase the art jewelry that was created. My biggest fear is that someone would not buy my necklace, but that was completely unfounded. My necklace 'Because I'm Happy' sold to a generous soul and I was able to write a little personal note of thanks to the buyer before she picked it up at the end of the show. 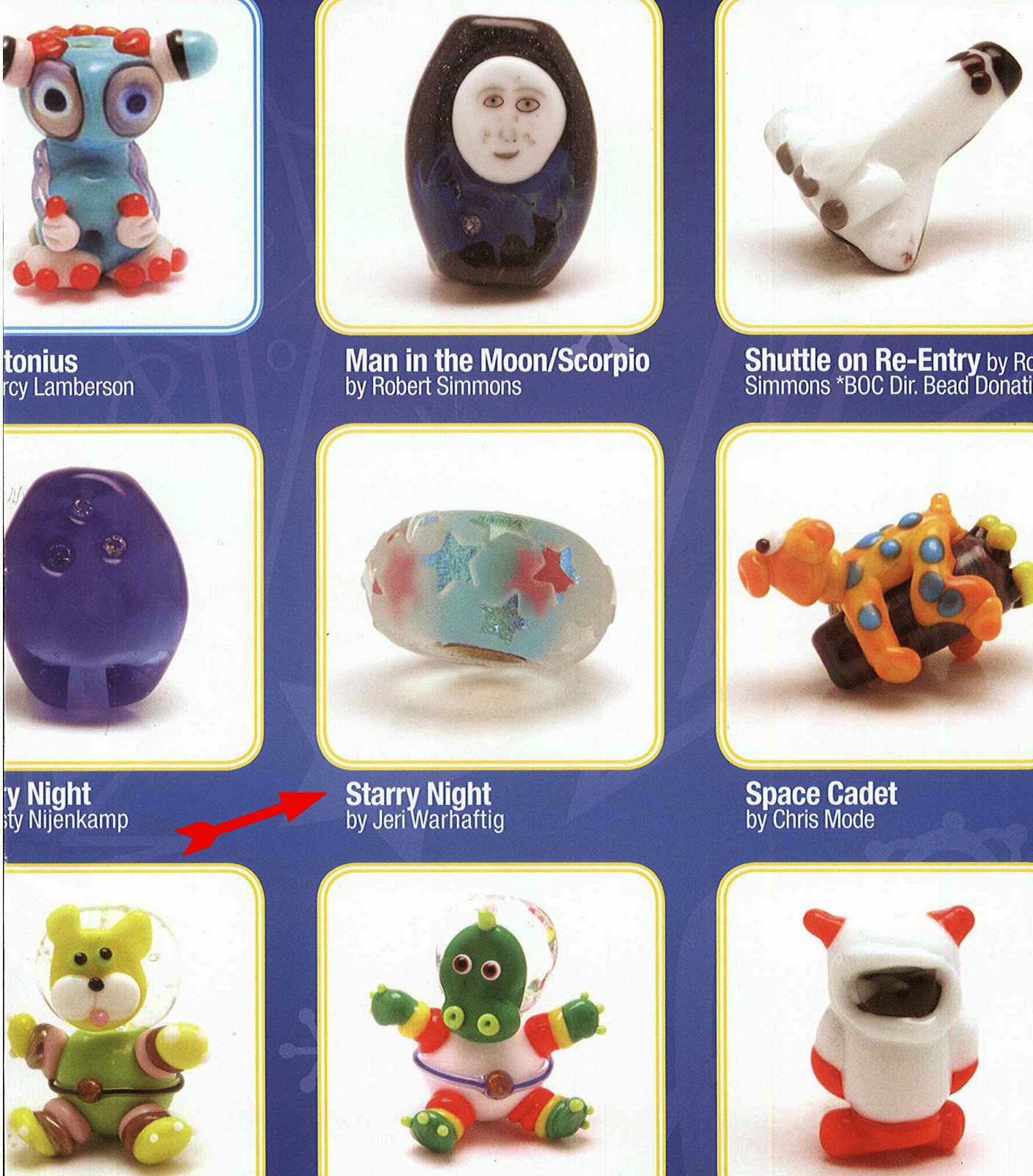 They also sold some of the extra beads that were created as well as some of their other beads from past campaigns. My favorite was the Beads in Space mission from 2010. Fifty-six beads went on two different missions on the Shuttle Atlantis and Shuttle Endeavor. These beads were all space themed with aliens, rockets, stars and the like and the originals traveled 125,935,769 miles! 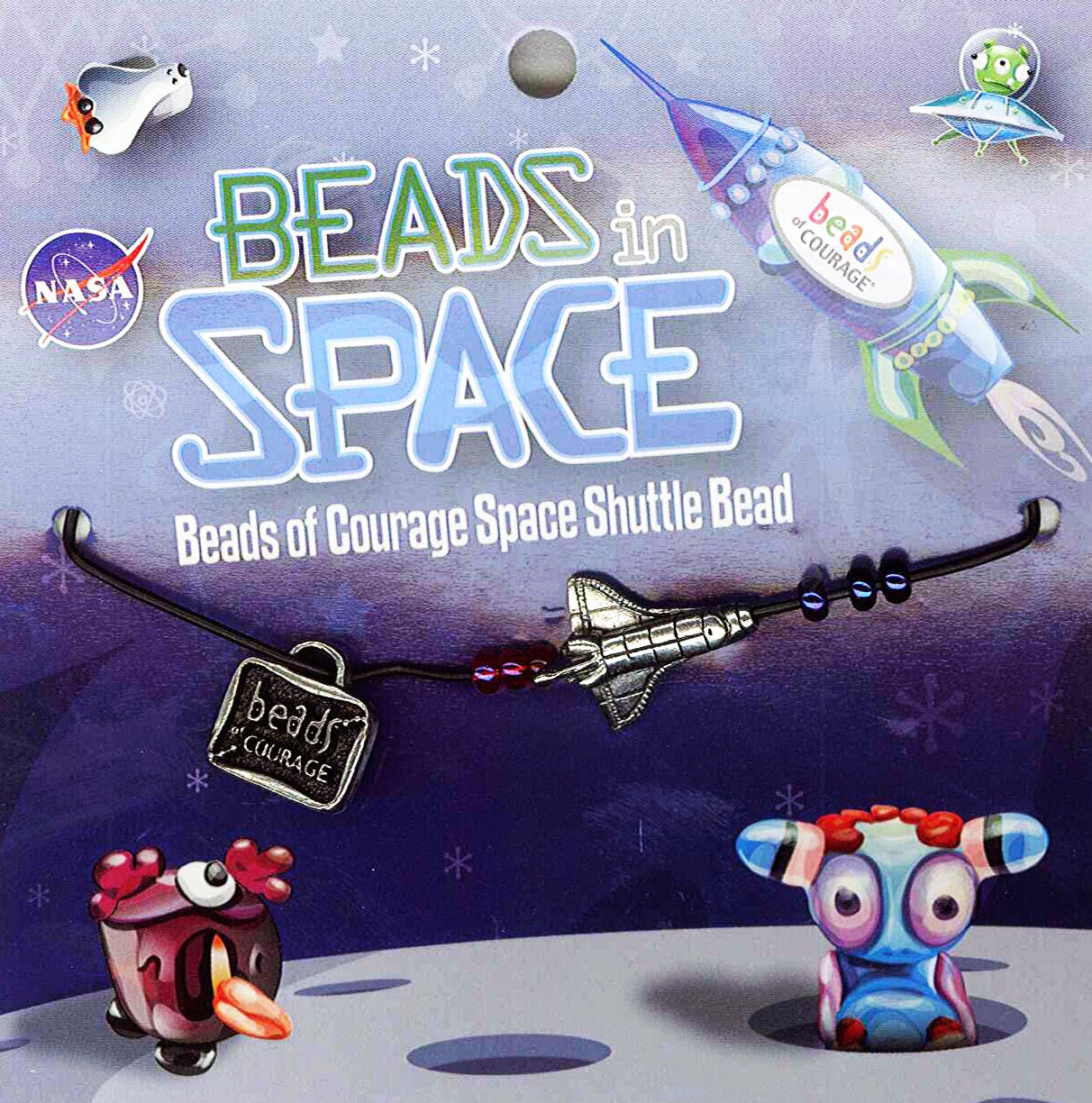 I purchased one of the last remaining replicas of the Starry Night bead by Jeri Warhaftig with a glow-from-within constellation. One of these days I will make something special enough to honor this little bead. I also got a Beads of Courage pewter Space Shuttle bead, which I will pass along to one of you, for the price of an answer to the following question:


Do you like to participate in collaborations? Why or why not? Tell us about a favorite one or suggest one in the comments!

Tell us all about your favorite out-of-this-world collaborations and this space shuttle might wing its way to you to encourage you to reach for the stars! 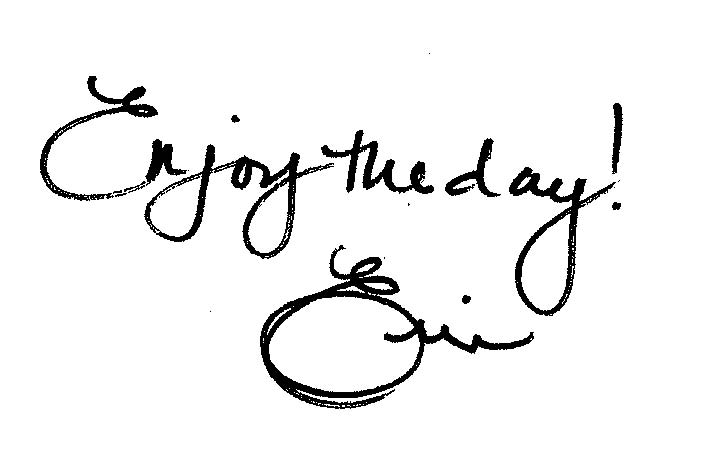 Posted by TesoriTrovati at 4:00 AM

Email ThisBlogThis!Share to TwitterShare to FacebookShare to Pinterest
Labels: beads of courage, Collaboration, Erin Prais-Hintz, inside the studio

I do love to collaborate especially for a great cause. Using beading skills to help others is terrific.

I love your design. It is truly happy! I can only imagine how much time went into it. Great blog post!

I've never had the opportunity to do a collaboration in jewellery making, but I think it would be fun!

Hi Erin, Your necklace design is fabulous. I have not had the opportunity to collaborate yet But I really would like to. I find challenges help stretch me as an artist and a collaboration would be one more way that I could grow.

Oh, Erin, what an amazing post! I am a polymer clay artist and I make Beads of Courage from ALL of my scrap clay. I have learned how to make them all gorgeous. And I also make gorgeous Beads of Courage from new clay. Once I blogged about some BOC that I'd made with tiny American flags on them and TWO kids in the BOC program who'd received my flag beads wrote to me!!! I collaborate with other artists each fall to make Art Charms to be auctioned off for BOC. I have sent in 24 POUNDS of BOC so far and have four pounds waiting in my punch bowl. When it is full I will send in 8 more pounds.

I haven't had the opportunity to really work with another artist with the exception of a friend's daughter who is quite talented at polymer beads. She makes the beads, I make the jewelry and she sells them to family members and friends to help offset the cost of college.

Wow what a neat cause. I'm super impressed with you Erin, and you too Susan. Who knew that making beautiful beads could bless so many lives.
-PajegoArtHouse

The closest I have come to a collaboration has been the Bead Soup blog hops that I have participated in. I enjoyed each one in varying degrees. The last one probably was the most satisfying in styles. But all pushed the creative button.

Now that is a truly happy and colorful necklace! I love colored wire. I have never done a collaboration but I think it would be fun and intimidating at the same time.

Wow! What a wonderful cause! I'm super impressed with all the collaboration efforts. Everyone did a great job & I really love the necklace you created. The coils are terrific & highlight the cute smiley face!

The coolest thing I have ever collaborated on was inadvertent. I sent Kate McKinnon a very simple example of her Zig Zag bangle from the Contemporary Beadwork patterns and she asked if she could expand on it. I was thrilled and can't wait to see the expanded piece in her new book.

As a total space nerd, I Love the space shuttle bead!!!

Lisa Lodge has a blog hop coming up where she has supplied an art bead to use in the blog hop. I did the same last year with Sharyl McMillian-Nelson and it really stretched my designing skills. I have also done several Bead Soup blog hops.

Thanks for sharing your design process.

Love the smiley face bead and necklace it was my favorite. Beads of Courage is such a great organization. So happy to see you mention it here on the blog. I love collaborating with others and do most with my dad, a wood turner (I'm a lampwork artist). Was happy to see MY bead in your post, vines in the flower pot on square bead, but no mention of the bead artist, just the jewelry artist, this made me a bit sad.

Miss Lara, I am sorry that the beads were not attributed in the few necklaces that I showed. I was only given photos of the necklaces and wasn't exactly sure which bead went with which maker. I have now tracked down that information and updated the caption on that photo. Thank you for contributing your time and talents to such a worthy cause! Enjoy the day. Erin

I am lucky enough to live in Tucson, AZ and have been to the Beads of Courage office here. The staff is amazing, as a disabled Air Force vet, I have been able to donate time, when I have a good day. Just as working with the Space Shuttle, the parts and construction require the efforts of many people. Also reading the stories of some of the youth that have been encouraged is very heart warming. Before I learned BoC is in the same city I live in, I donated time to Ben's Bell, encouraging intentional kindness. For one to be completed it takes 10 different sets of hands to make. Just like the HAPPY you shared, it took a child to create the art, which was converted to a glass bead work of art, with through the generosity of others, you created an amazing work of art for someone to wear to have themselves and others smile. Thank you for sharing your creativity with others. :)

Thanks for the update. Sorry so late getting back to sa thanks.