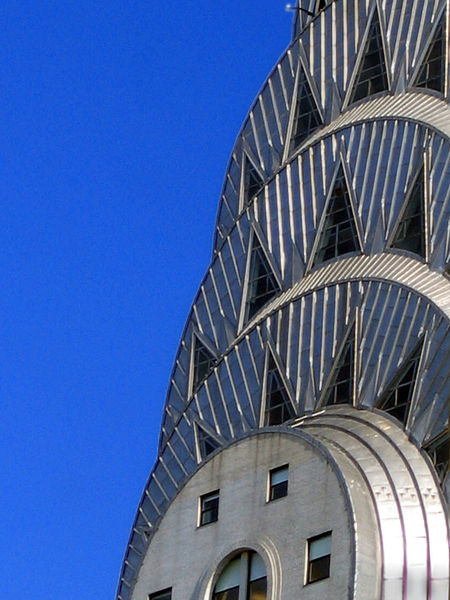 Chrysler Building, 1928-1930
William Van Alen
About the Art
The Chrysler Building was designed by architect William Van Alen for a project of Walter P. Chrysler. When the ground breaking occurred on September 19, 1928, there was an intense competition in New York City to build the world's tallest skyscraper. Despite a frantic pace (the building was built at an average rate of four floors per week), no workers died during the construction of this skyscraper.
The Chrysler Building is considered a masterpiece of Art Deco architecture. The corners of the 61st floor are graced with eagles; on the 31st floor, the corner ornamentation are replicas of the 1929 Chrysler radiator caps. The building is constructed of masonry, with a steel frame, and metal cladding. In total, the building currently contains 3,862 windows on its facade and 4 banks of 8 elevators designed by the Otis Elevator Corporation. The building was declared a National Historic Landmark in 1976.
The Chrysler Building is also renowned and recognized for its terraced crown. Composed of seven radiating terraced arches, Van Alen's design of the crown is a cruciform groin vault constructed into seven concentric members with transitioning setbacks, mounted up one behind another. The stainless-steel cladding is ribbed and riveted in a radiating sunburst pattern with many triangular vaulted windows, transitioning into smaller segments of the seven narrow setbacks of the facade of the terraced crown. The entire crown is clad with silvery "Enduro KA-2" metal, an austenitic stainless steel developed in Germany by Krupp and marketed under the trade name "Nirosta" (a German acronym for nichtrostender Stahl, meaning "non-rusting steel").
When the building first opened, it contained a public viewing gallery on the 71st floor, which was closed to the public in 1945. This floor is now the highest-occupied floor of the Chrysler Building, it was occupied by an office space management firm in 1986. The private Cloud Club occupied a three-floor high space from the 66th–68th floors, but closed in the late 1970s. Above the 71st floor, the stories of the building are designed mostly for exterior appearance, functioning mainly as landings for the stairway to the spire. Very narrow with low, sloped ceilings, these top stories are useful only for holding radio-broadcasting and other mechanical and electrical equipment.

About the Artist
William Van Alen was born in Brooklyn, New York, in 1883. He attended Pratt Institute in Brooklyn while working for the architect Clarence True. He also studied for three years at the Atelier Masqueray, the first independent architectural atelier in the United States, founded by Franco-American architect Emmanuel Louis Masqueray.
Thereafter, Van Alen worked for several firms in New York, notably working on the Hotel Astor in 1902 for Clinton & Russell, before he was awarded the Paris Prize scholarship in 1908.[1] The scholarship led to his studying in Paris, in the atelier of Victor Laloux at the Ecole des Beaux-Arts.
When Van Alen returned to New York in 1911, he formed a partnership with H. Craig Severance. The partnership became known for its distinctive multistory commercial structures. Their friendship grew strained over time, and eventually the partnership dissolved. Thereafter, both Severance and Van Alen continued to practice on their own in New York.
In the late 1920s, both architects found themselves engaged in designing buildings that were heralded in the press to become the tallest buildings in the world: Severance, the Manhattan Trust Building 40 Wall Street and Van Alen, the Chrysler Building. At 1046 feet, Van Alen's building won. However, both buildings were surpassed in height by the Empire State Building in 1931.
The completion of Chrysler building was received by critics with mixed reactions. Van Alen was hailed as a "Doctor of Altitude" and as "the Ziegfeld of his profession." However, the building itself was described by some critics as just flash which "embodies no compelling, organic idea" and which was "distinctly a stunt design, evolved to make the man in the street look up" but having "no significance as serious design."
Nevertheless, the Chrysler Building remains a beloved New York City landmark structure.
Unfortunately, Van Alen had failed to enter into a contract with Walter Chrysler when he received the Chrysler Building commission. After the building was completed, Van Alen requested payment of 6 percent of the building's construction budget ($14 million), a figure that was the standard fee of the time. After Chrysler refused payment, Van Alen sued him and won, eventually receiving the fee. However, the lawsuit significantly depreciated his reputation as an employable architect. His career effectively ruined by this and further depressed by the Great Depression, Van Alen focused his attention on teaching sculpture.
Blog Tour
The Blog Tour deadline is December 28th.
Links must be added to the monthly challenge post comments (this post).
The Blog Tour will be on the 30th.
Monthly Challenge Winners
Winners will be randomly chosen from all the qualifying entries on December 1st.


Our Sponsors
Our sponsors this month are Beads of Clay and Nunn Designs.
Please visit us Monday to see the prizes!
Featured Designer of the Week:
From all the entries during the month, an editor is going to pick their favorite design to be featured every Monday here on the ABS. We want to give our participants more time in the spotlight! Our Featured Designer will be this Monday, so get those entries in soon.
How to enter the Monthly Challenge:
1. Create something using an art bead that fits within our monthly theme. We post the art to be used as your inspiration to create. This challenge is open to jewelry-makers, fiber artists, collage artist, etc. The art bead can be created by you or someone else. The challenge is to inspire those who use art beads and to see all the different ways art beads can be incorporated into your handiwork.
***Beads strung on a chain, by themselves and beads simply wire or cord will not be accepted.***


2. Upload your photo to our flickr group. Detailed instructions can be found here and click here for a tutorial for sending your picture to the group.
Please add the tag or title DEC ABS to your photos. Include a short description, who created the art beads and a link to your blog, if you have one.
Deadline is December 31st. Photos are approved by our moderators, if a photo hasn't followed the guidelines it will not be approved. You may upload 2 photos a day.
What is an Art Bead?
An art bead is a bead, charm, button or finding made by an independent artist. Art beads are the vision and handiwork of an individual artist. You can read more about art beads here.
***A bead that is handmade is not necessarily an art bead. Hill Tribe Silver, Kazuri ceramic beads or lampwork beads made in factories are examples of handmade beads that are not considered art beads.
Beaded beads, stamped metal pendants or wire-wrapped components are not considered art beads for our challenge.***
p.s. If you have a blog, post your entry and a link to the ABS challenge to spread the beady goodness.
Posted by Tari of ClayButtons.com at 10:02 AM

Oh I love the idea of a challenge inspired by a wonderful iconic building such as this! I'm putting on my thinking cap now.

I just want to make sure I understand. Would a bead/pendant made with metal clay be considered an art bead for the challenge?
Thanks.

I love your ornaments! Snowman have always been my favorite! Just beautiful!

I cannot believe I got my post up already! WooHoo! I am on the ball this month. Okay here's the real reason, I knew I'd forget come the holidays, lol.
Shannon C

Thanks so much Heather. I wasn't sure. I really love the inspiration for this challenge and have been trying to think of something to make. I've never entered one before.

I actually finished my piece early this month! Here's my post:

Thanks for the inspiration. I am learning Spanish, so I practiced my new language by writing a short blog article about the ABS challenge and my piece. I am having no luck linking to your post, so here is my blog's address: http://palumbojewelry.blogspot.com/2011/12/los-abalorios-arte-un-reto-mensual-y-un.html

Post about the Dec Challenge here at my blog:
http://www.thebeadingyogini.com/2011/12/17/december-art-bead-scene-challenge/
Love the blues!

LOVE this month's inspiration for the challenge!

I blogged my entry at http://scdiva.blogspot.com/2011/12/december-art-bead-scene-entry-uncle-sam.html

I have been in that building and I know someone who works there. So I felt compelled to do this challenge.

Finished in the nick of time! Details at: http://mackin-art.blogspot.com/2011/12/deco-skyline.html

I'm too late for the tour, but I've still posted my entry on my blog and pointed to the ABS page so people will tour along! My blog is here, if anyone happens to see this and wants to take a look:
http://sharylsjewelry.blogspot.com/2011/12/art-bead-scene-challenge-dec-2011.html

Tried to add to the Flickr group, but think I goofed in the process.
You can see my 2 photos and descriptions plus additional photos here: http://www.flickr.com/photos/sharylsjewelry (Top 2 were ones I planned to put with the group online.)