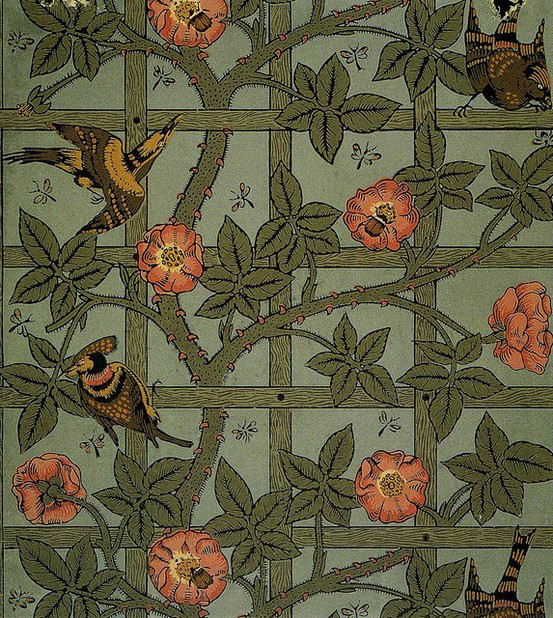 "Trellis was William Morris' first commercially available wallpaper design. It was sold through the company of Morris, Marshall, Faulkner & Co, which was later to become Morris & Co, in 1864. However, the design itself had been completed by Morris two years before in 1862.

Trellis was said to have been inspired by Morris new family home of Red House which had been designed and built, with assistance from Morris himself, by his friend and architect Philip Webb in 1859.

Interestingly, the design itself was an inspired combination of talents, rather like the designing and building of Red House, between Philip Webb and Morris. Morris throughout his life lacked confidence in his drawing ability and while he was secure enough in his ability to produce excessive amounts of flower and foliage throughout his career, he was always less certain when it came to anything biologically more complex. Therefore, in Trellis Webb produced the birdlife while Morris produced the rest of the design.

...This was the first example of a Morris wallpaper design that the market had seen, it was also very different from what was immediately available for interiors during this period. The design work is purposely naive and unsophisticated. A strategy has been taken by the designer in producing pattern work that bears little resemblance to any machine produced wallpaper of the period and this was obviously a conscious factor in Morris creative output. The flattened graphic appearance of the pattern work and the disregard for any form of naturalized three-dimensional quality sets it aside from much of the excessive floral and topographical wallpaper design work that was so much a part of mid-Victorian interiors. That many of these wallpapers are now long forgotten while Morris Trellis is still as well known and familiar today as it was one hundred and fifty years ago, says much about the designers own conviction and strategy towards the decorative arts.

Despite the early date of this wallpaper, it was always one of Morris favorites. It was part of the decor of his bedroom at Kemscott House during the last two decades of his life. Morris may well have been sentimental as to the perceived origin of the design. It perhaps reminded him of the period of his life where opportunities abounded. It was an era where he was starting out on a new creative career, a new marriage and a new house. However, Trellis can also be seen on a much wider scale as one of the first steps in a career that was to fundamentally change so many aspects of the English decorative arts world, much of it permanently." –The Textile Blog

About the Artist
William Morris March 24, 1834–October 3, 1896 was an English textile designer, artist, writer, and socialist associated with the Pre-Raphaelite Brotherhood and the English Arts and Crafts Movement. He founded a design firm in partnership with the artist Edward Burne-Jones, and the poet and artist Dante Gabriel Rossetti which profoundly influenced the decoration of churches and houses into the early 20th century. As an author, illustrator and medievalist, he helped to establish the modern fantasy genre, and was a direct influence on postwar authors such as J. R. R. Tolkien. He was also a major contributor to reviving traditional textile arts and methods of production, and one of the founders of the Society for the Protection of Ancient Buildings, now a statutory element in the preservation of historic buildings in the UK.

Morris wrote and published poetry, fiction, and translations of ancient and medieval texts throughout his life. His best-known works include The Defence of Guenevere and Other Poems (1858), The Earthly Paradise (1868–1870), A Dream of John Ball (1888), the utopian News from Nowhere (1890), and the fantasy romance The Well at the World's End (1896). He was an important figure in the emergence of socialism in Britain, founding the Socialist League in 1884, but breaking with that organization over goals and methods by the end of the decade. He devoted much of the rest of his life to the Kelmscott Press, which he founded in 1891. Kelmscott was devoted to the publishing of limited-edition, illuminated-style print books. The 1896 Kelmscott edition of the Works of Geoffrey Chaucer is considered a masterpiece of book design.

Blog Tour
The Blog Tour deadline is January 29th.
Links must be added to the monthly challenge post comments (this post).
The Blog Tour will be on the 31st.


Monthly Challenge Winners
Winners will be randomly chosen from all the qualifying entries on December 1st.

Our Sponsors
Our Sponsors this month are Ornamentea and Melinda Orr Designs.
Please visit us Wednesday to see the prizes!

Featured Designer of the Week:
From all the entries during the month, an editor is going to pick their favorite design to be featured every Monday here on the ABS. We want to give our participants more time in the spotlight! Our Featured Designer will be this Monday, so get those entries in soon.


Please add the tag or title JAN ABS to your photos. Include a short description, who created the art beads and a link to your blog, if you have one.
Deadline is January 31st. Photos are approved by our moderators, if a photo hasn't followed the guidelines it will not be approved. You may upload 2 photos a day.

I love the dark greens and oranges in this wonderful William Morris design!!! Great inspiration!

I make art beads myself. Kind of a shame you have to make some type of finished necklace, earrings, etc. Sometimes the bead speaks for itself and you don't need a bunch of crap to detract from it.

Just posted my entry one my blog!
http://honeybijou.blogspot.com/2012/01/january-art-bead-scene-challenge.html Can't wait to see what other people are doing with this challenge.

Just finished up for the month. Read more about the design process here:

Mom and I were able to finish up our monthly challenge piece in time. Here is the link to our post: http://ebbeadandmetalworks.blogspot.com/2012/01/january-abs-challenge-piece-tra-la-la.html

I blogged my entry here:

Just posted my entry on my blog! See it here: http://www.treewingsstudio.com/2012/01/brier-rose-january-abs-challenge.html

And I finally took pics and posted, phew!

I love this months challenge art! Just finished posting about my submission for this month's challenge.

HERE ARE THE LINKS TO MY ENTRY FOR JAN ABS, TRELLIS BY WILLIAM MORRIS , 1862

i DONT HAVE A BLOG BUT ON FACEBOOK i HAVE A NOTE WHICH IS SIMILAR HERE IS THE LINK:
http://www.facebook.com/profile.php?id=100003288373307&sk=notes
HERE IS ALSO MY FLICKER LINKS OF THE PHOTOS AND ENTRY
http://www.flickr.com/photos/kidalski/6788146859/in/photostream

I THINK I DID EVERYTHING CORRECTLY , I HAD SO MUCH FUN CREATING. SUCH BEAUTY WAS A VERY EASY INSPIRATION TO CREATE FOR.

I finished my piece in the wee hours this morning. I just noticed that the deadline was yesterday. I hope that my submission will be accepted.
My blog link is http://attorneyangelalundlogan.blogspot.com/2012/01/garden-gate.html

My entries appear on my blog here:
http://sharylsjewelry.blogspot.com/2012/01/art-bead-scene-challenge-jan-2012.html