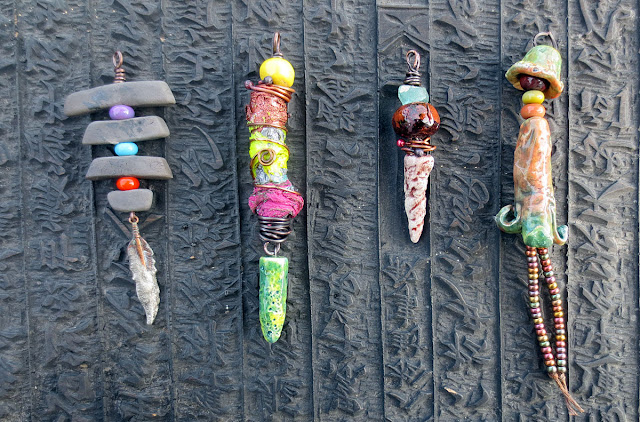 At the Ceramic Art Bead Market where I often participate as a seller,  it is usual to see offerings of bead sets.  I have recently been interpreting this trend by putting together beads that lend themselves to stacking.  For today's post I will be sharing some of my  ideas for how these stacks can be strung together to make a single long pendant.  The picture above has some recent examples.
Let's look at them one at a time as I share with you what I did to get them strung.  The first piece is a set of raku black sticks which I made.   They are simply strung on patinated 18 gauge copper wire.  I separated the sticks with some lovely  Weenie SHOUT lampwork beads from Julie Wong Sontag of Uglibeads.  These very small brightly colored spacers were the perfect addition to set off the gray black beads.  I began at the the bottom of the pendant where I  made a simple wire loop to hang one of my Soft Solder Feathers and keep the beads from slipping off the wire. Once all the beads were strung on the wire, I made a wrapped loop at the top that was big enough to accomodate the long ball chain from Ornamentea that I hung it from.  No clasp needed since it is long enough to slip on over my head. 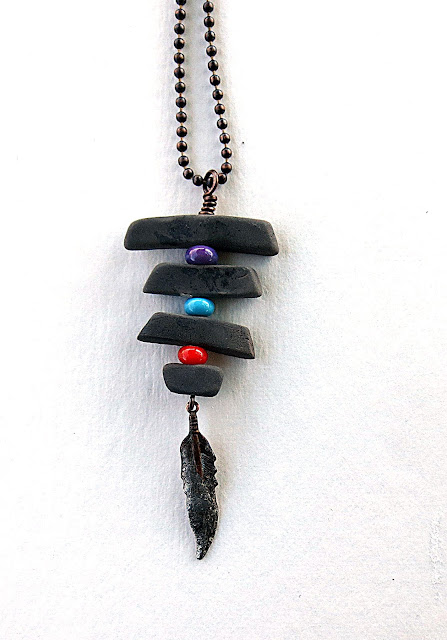 For this next pendant ( I am going in the order that they are in the picture at the beginning of this post), I used a very long and kind of wild bead I made from Tyvek based on a set of 2 Tutorials by Carolyn Saxby.  ( Part 2 is Here.) The wire scroll and wrapping of the center of the bead was done at that time.  Because I made this bead and several others in the depth of winter, and was working outside due to the unsafe fumes from the heated Tyvek, I used my micro torch rather than the soldering iron she suggests.  It was just too cold for the Tyvek to melt otherwise. I mention this because my results are a bit different than hers. 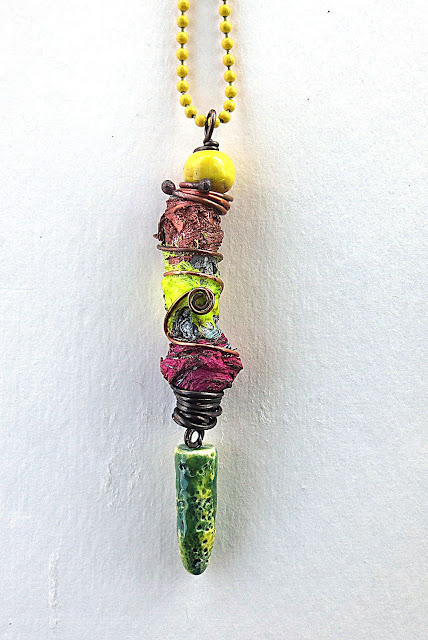 
For this pendant, I used one of my ceramic drop beads and attached it below the Tyvk Bead with a heavily wrapped loop using 18 gauge patinated  copper wire.  I started with a piece of wire that was about 15-18 inches long.  After the drop was attached I strung the wire through this very long bead and through the yellow ceramic raku fired bead.  Then made another wrapped loop to string the pendant and took the rest of the wire back over one side of the bead and around the neck of the pendant.  At this point I had run out of wire but thought the neck looked a little bare so I took a piece of copper wire--20 gauge--about 5 inches-- and balled both ends and then wrapped that around the bead by placing the middle of that wire in front and wrapping each end in opposite directions so that the little balls would come out in front.  For wearing I used a yellow ball chain from Ornamentea. 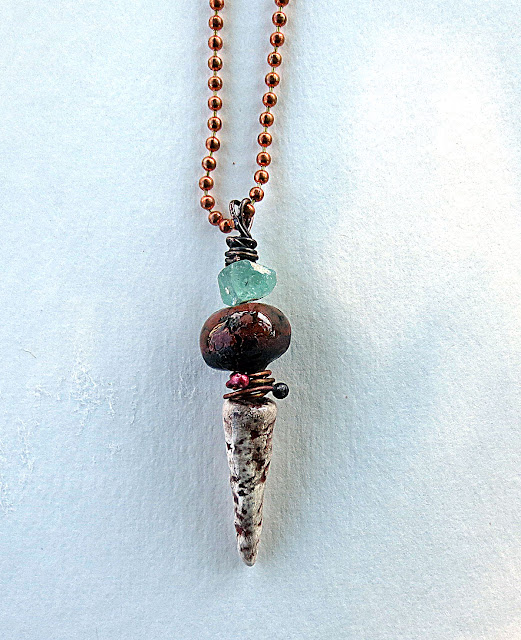 Stacked Pendant with Ceramic and Roman Glass Beads by MaryHardingJewelry

Next I will talk about how I made the smallest of these stacked pendants.  I used 20 gauge patinated copper wire which I folded in half and strung on the drop bead and then sent both strands of the wire through that rustic brown ceramic bead leaving a little wiggle room for the drop to swing back and forth.  Once through the brown bead I added a piece of Roman glass and then made a wrapped loop with both strands of wire.  I could have separated the two strands of wire after stringing the blue roman glass and made the loop with one strand and then wrapped the other around it and snipped it and finished up with wrapping the other strand around.  But I though it would be stronger since it was 20 gauge wire to do it the way I did.  I like the idea of using folded wire to attach the drop but it had to be thin enough to fit through the other beads.
To cover up the stringing loop on the ceramic drop bead I wrapped a 5-6 inch piece of 18 gauge wire that had both ends balled through the loop and around it a couple of times.  It added a nice bit of color as well as complimenting the wire wrapping above it.  This pendant is on  unpatinated copper ball chain that I purchased from Rio Grande by the spool ( along with some connector links, as well.) 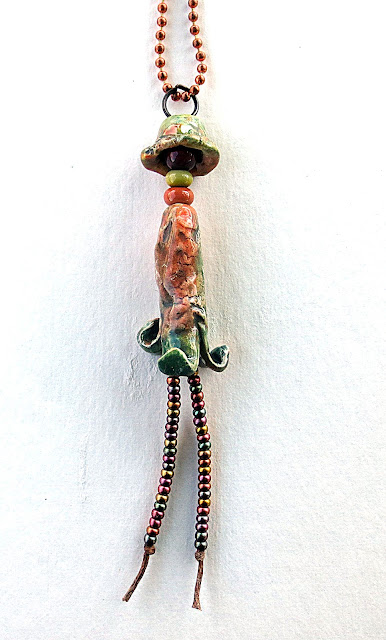 I think this pendant ( pictured above)  is my favorite of the bunch.  To make the stack, I used   12 inches of 4 ply dark brown waxed linen, folded in half, in much the way I used the wire in the piece above but started from the top with the little bead cap.  To hold the waxed linen in place and keep it from slipping through the hole in the bead cap, I attached a jump ring that would also serve as a way of adding the pendant to a chain when I was finished.  To stabilized the bead cap I put a bead inside of it and then for color I added two of Julie Wong Songtag's Shout Beads in colors that I think are  lovely and go well with my long hollow ceramic tube flower bead.  Luckily the holes were big enough for this rather heavy waxed linen.  Once through all of the beads, I had two nice long stands of the linen left which I wanted to put seed bead on for decorative reasons and also as a way to hold the whole pendant together.  I used some Fray Check from Joanne Fabrics to keep the linen strands together and stiff enough to push through the rather small holes of the size 8 seed beads I wanted to use.  It worked out but does take some patience to string them.  I had to push the beads up the linen inside of the tube flower bead.  I used a strong tooth pick for the job and it worked out great.  I kept pushing the beads along and pulling up on the jump ring to see how much was left to do.  Then I did the other strand and pulled on the jump ring some more to make sure there wasn't any slack.  Then I tied over hand knots about an inch from the ends of the strands. I slid the knots up the linen to meet the seed beads--again using that toothpick-- and snipped off some of the extra.  I used unpatinated copper ball chain to hang this one as well.  The red copper color compliments those orange and yellows in the tube bead and makes a nice finishing touch.

It seems that each of these pendants required different ways of stringing them.
I hope you found some helpful ideas here today and will try making your own stacked bead pendants.
Thanks so much for stopping by.
Mary

What a great and interesting post. All the pendants are lovely, but the tyvk one is so unique, I just love it. Of course - I love them all and your description of your process to making them is wonderful. Thank you for giving us this insight.

I am loviing stacked beads. I like this post because I can see into another artists' creative process. Many times I do something and I think it is not good enough but when Isee a post like this it helps me to see that I am too haed on myself. Thanks!

Thanks so much for this interesting & informative post Mary. I really enjoyed reading ur description of making these, so much more interesting to have a tutorial in narrative form :) I love looking at all the gorgeous beads for sale in the Ceramic market, among other places, but my mind always gets stuck on bracelets or earrings - probably because that's my personal taste, so it's great to have other ideas on how to use all the beautiful hand crafted pieces these amazing artists make :)