This week we visit the studio of Tari Sasser at Creative Impressions In Clay. 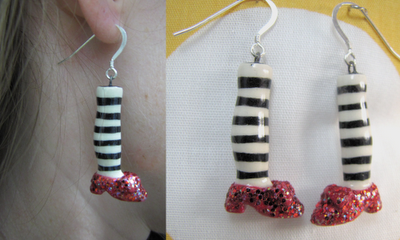 Happy Halloween! It's so much fun to decorate for Halloween. I wanted to make something fun for Studio Saturday that I can use to decorate my ears. I never seem to get around to making new designs unless I'm forced. Why not the iconic striped stocking and ruby red slippers? I love the "Wizard of Oz!" I have a T-Shirt with the same imagery on it and thought it would make terrific earrings. I formed both of these by hand, cleaned them up, put on the underglaze, fired, put on the clear glaze and fired again. I used Sparkly Mod Podge as the glue and sealant for the glitter. It would be sparkly on the entire shoe.
I have other plans to make lots of the legs for a necklace which I think would be hilarious. I am hoping my attempt to make a 2 part mold will be successful. 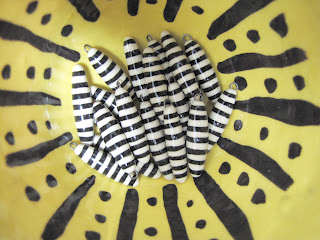 I also made these cigar/monster rice shaped dangler beads with the intention of making a necklace. Well, I didn't have time since I fired them too late. I have a pseudo design dancing around in my head. If that doesn't work out then earrings. I keep thinking Beetlejuice, which is such a great movie.

For Halloween, my question is:
What was your best Costume? If you didn't have one what would be your best costume?
Leave me a comment and you could win a pair of Candy Corn earrings! TREAT!! 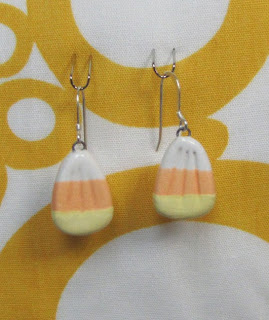 Posted by Tari of ClayButtons.com at 6:00 AM

love the stripey legs-hilarious! I used to have a pair of leggings just like that--I wore them with a white linen jacket. (hey, it was the 80s.)

My best costume was "Erin Scissorhands." I wore a black leather motorcycle jacket holding a pair of scissors in each hand, and black leggings with black thigh high boots. My hair was shorter then, so I spiked it up and put lots of white powder on my face with dark circles under my eyes and cheekbones.

My favorite costume was the year I went as Winifred Sanderson from the movie "Hocus Pocus". I made her famous book from an old cigar box and polymer clay. :-)

Often at Halloween it seems that I am always sewing someone else an elaborate costume...then quickly throwing something together for myself at that last minute. My favorite costumes that I have created is a toss up between a queen with her knight in shinning armor and an Antonio Banderas style Zorro outfit.
This years only request of me was a creepy skull & bone necklace for my grandson to wear with his spooky pirate outfit his mother put together for him. Lots of time to put together a costume for myself then.
What I am wearing to the 1930's dinner party on Halloween? I havent figured it out yet. As usual, it will be that last minute throwing something together for myself.

Work of Our Hands, thank you!!!

Erin, LOL I still wear stripey socks! In fact I will probably where some for date night tonight.
What a great costume!!!

Susan, that sounds like a magnificent costume!
My fave was many, many years ago I was Devil with the Blue Dress.
Thanks for stopping by.

Cheral, a mothers job is never done! A 1930's dinner party, interesting. Let me know what you come up with!
Thanks for visiting today!

One year my husband and I went as Akbar and Jeff from Matt Groening's cartoon "Life in Hell". We went as the black and white versions with white shirts with a charlie brown stripe and a paint bucket fez.

My first thought when the screen popped up was BEETLEJUICE !!! What fun. I too am usually making a gazillion costumes and walking around in a fancy hat. Althought last year I got to buy a very fancy witches gown and hat and went all out to my now 4th graders Halloween event at school. I got to lead all the kids down the Haunted Hallway as an English Witch and it was quite fun !

Sabine, that is too funny! Thanks for stopping by.

My life under the bus...I'm not even going to ask about the reasoning for name, even though it' pretty funny.
Beetlejuice was great! I love the sound of a fancy witches gown, makes you feel like a pretty, pretty princess. I'll bet is was a blast leading the kids/
Thanks for visiting!

i can;t remeber any of my costumes but one year my mother made costumes for she and my dad -she was a can of corn and he was the Jolly Green giant. The corn costume was made with a fabric stretched around a round frame and she cut each leaf on the Jolly Green Giant costume separately out of felt - the corn costume didn`t survive our many moves, but my brothers were still wearing the other costume years later.

My favorite costume........hmmm, I love to dress up and have been, a witch,hobo,gypsy,french maid and saloon girl just to name a few. But my favorite costume was one I made for my son's first time dressing up when he was 2. It was a black cat. I bought a pattern for a pumpkin, made the body out of black felt with the pumpkin pattern. Made a black felt tail with a hanger wrapped in batting inside so I could bend it. Took a dragon hood(from my brothers old costume)took it apart to make a pattern and made one in black felt with ears. Dressed him in black tights & turtleneck, put the body,tail and hood on painting his face and he was the cutest cat ever. That same costume has been modified to a bee & mouse and is now a back to a cat waiting to be used by future generations.
I love the little leg earrings, the red shoes are just too cute.

The best costume, but certainly not the most flattering one, was when my sister turned me into a California fruit fly. Big black garbage bag, puffed out over black tights, big eye makeup and a pair of black pantyhose over my head with a tube on each side inside the legs, with the bottom of the legs and the toes hanging down. I am truly glad nobody took a picture.

I have to say my best costume was my punk costume, circa 1980. However, everyone kept pulling on my safety pin mask that was attached to my pierced ears, OWEE. I died my hair black. Serious punk clothes. Some faux Doc Martins and I partied with a man dressed like the inside of a camera lens and two men dressed as Fruit of the Loom characters. It was a creative bunch. Fun!

I was a witch, once. A little girl started to cry when I opened the door. No more! I don't like to see the little ones get that scared.

SusanM, how fun is that! Love creative costumes.
Thanks for stopping by!

Beth, that costume for your son sounds fantastic! My daughter is making my grandson's costume this year. It's a lot of work.
Thanks for visiting ABS!

Susanna, that is hilarious! Never would have thought of a fruitfly!
Thanks for commenting today!

Elizabeth, that is too funny! you can party with the best.
Thanks for stopping by!

Rosebud, awwwwww, you never the reaction you are going to receive. But it's too much fun to dress up!
Thanks for visiting!

We attend a Halloween party every other year (They skip a year). My favorite costume was quite easy to put together and they still talk about it today. I wore plain gray sweats, put some big rollers in my hair, got a really long cigarette holder to put in my mouth to accentuate the cigarette, put a pillow under my top to look pregnant, pinned a cabbage patch kid doll around the bottom of one leg, like a child hanging on, held another cabbage patch kid doll in my arms and of course walked around the party with a drink in my hand. I told everyone I went as myself. (I have four kids- but I don't really smoke)

Cindy, what a great costume! Sounds like a picture I saw of Courtney Love when she was pregnant...they airbrushed everything out.
Thanks for visiting!

Best costumes were for a company department of five people. We wore (new) toilet seats around our neck. Playing cards showing appropriate playing cards (ace, king, queen, jack, ten( were glued to toilet seat rings creating a "royal flush" I know - BAD.
I love your wizard of odds earrings. When will they be for sale?

Gina, that is funny! I need to make a 2 part mold so I can start making them. Hopefully they will be for sale in a few weeks.
Thanks for commenting!