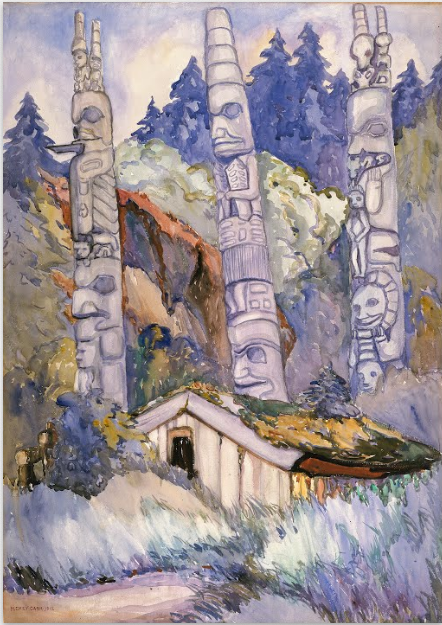 Back in October of 2014, Art Bead Scene opened the monthly challenge up to hand made artist beads in addition to jewelry and all of our entries began to be posted on Pinterest.  Today in my post,.Meet The Bead Artists, I am focusing on the  art bead entries so far this month that have been posted to Pinterest.

I begin with the art beads of Barbara Handelsman, aka BHClaysmith

Barbara Handlesman's  art bead is a reversible pendant made from stoneware clay which has "6 spirit holes" for attachments.  The  surface design is from her own  rubber intaglio mats that she makes from her original carvings. Her career before discovering ceramic clay in 1994 was as an interior and architectural designer.
Barbara tells me that she was inspired by the "subtle shades of nature," and "the primitive feeling of the place."--referring to Emily Carr's  Haida Totems. She says she chose a piece with blue because "blue for me is such a vast yet solitude color, symbolizing simplicity in a wilderness space."

Here are 2 other examples of Barbara's art beads I found in her Etsy shop: 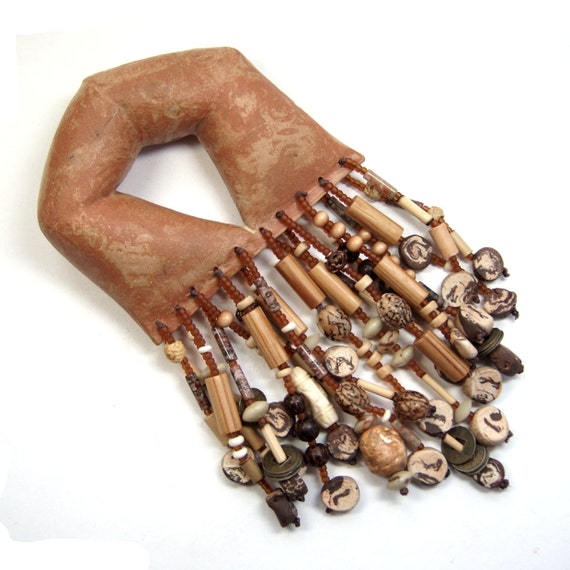 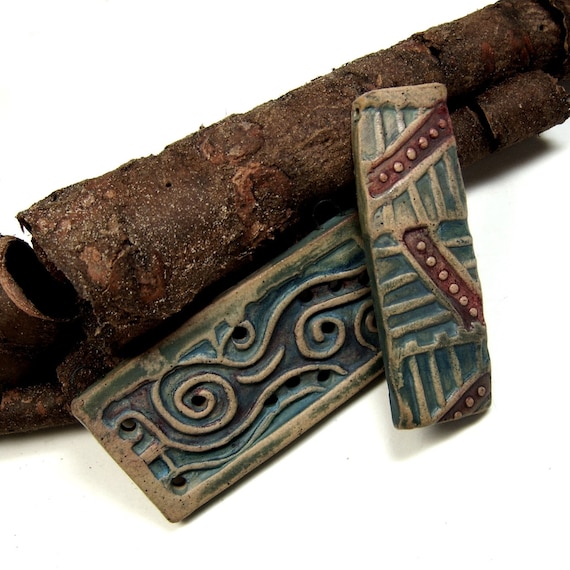 
Reversible Triangle Stoneware  One of a kind by BHClaysmith

In the About section of her shop, Barbara talks about her discovery of clay and her on going exploration of the medium...  I quote from a part of what she  has to say:

...I strive to compose the language of clay and I eagerly impart (to anyone interested) the intriguing ways of clay beads. Whether knotted together in strands or left as single symbols of contemporary artifacts for carrying in pockets, these miniature manifestations personify peace, harmony and partnership in a time when dominance &amp; strife seems the norm. Beads worn or handled absorb our very essence becoming an extension of who we are and what we wish to become.
+++++++++++

Our next bead artist is Sheila Davis of StoneDesignsbySheila..  She is a lampwork glass bead artist who lives in the Pacific Northwest, in the state of Washington.  She often finds inspiration for her beads in art work and nature.  She has an especial love of flowers and formerly was a florist for almost 20 years.
Sheila tells us that " As a glass bead maker, I endeavor to convey a feeling of natural beauty by combining color ,texture,balance and design, expressing my love of nature, especially flowers through glass as my medium." When I asked Sheila Davis how she was inspired to make the bead pictured above, she told me "I tried to pick up the blues in the painting...those being the dominant color. I softened the bead with the underlying earth tones. This is an impressionist style of bead inspired by the beautiful painting by Emily Carr.
Here are 2 more examples of Sheila's art beads: 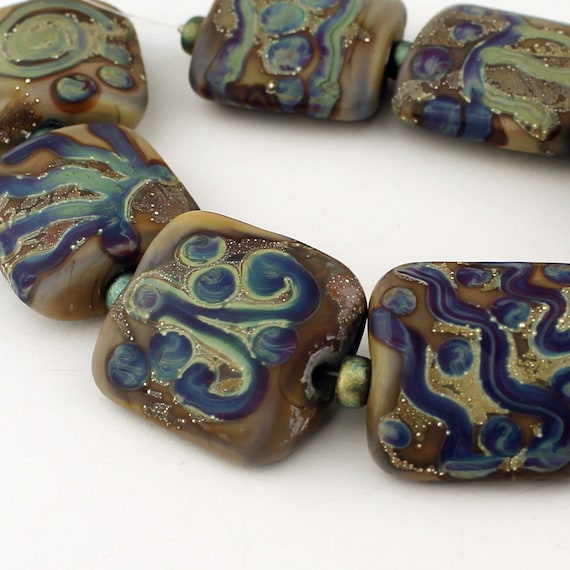 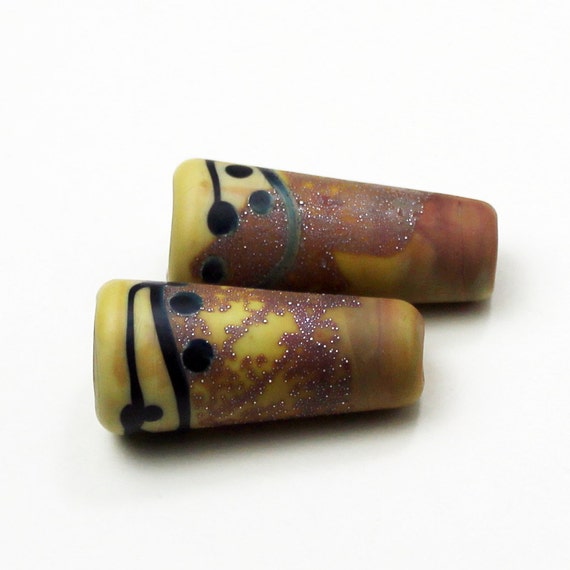 Totem and Spike Beads by Mihaela Georgescu
The totem and spike beads seen in the picture above are made by Mihaela Georgescu.  Mihaela is a mixed media artist, and bead embroidery artisan from France .  She is "passionate about beads, colors,beading and bead embroidery, art and life in general."  Mihaela primary designs and makes jewelry that is composed of beads that she makes herself.  The art beads in the picture above were made specifically for the Totem Necklace she submitted to ABS this month. Necklace by Mihaela Georgescu
And here is the necklace she made with them.  Mihaela tells me that she does not sell on line, and has given the decision a lot of thought.  She says she prefers trying out lots of different styles and mediums and also likes teaching.  Her plan is to begin on April 1"posting every day a new photo tutorial on my blog with a finished piece of jewelry and the way I made it."  She also plans to set up a site with a database of video and photo tutorials (her own) both free and some paid subscriptions.
She says that she has learned a great deal from others on the internet through YouTube and Tutorials and wants to give back.  Hence she has written 2 tutorials on how she made these beads.  You can read them HERE on her blog called Extravaganza Beading. You can follow her on Facebook.  Here  is a picture of one of here necklaces.  She made all of the beads from polymer clay.  You may remember her work on last months ABS Challenge. Indigo Goddesses by Susan Dolphin Delaney
These Indigo Goddesses pictured above are by Susan Dolphin Delaney and are her entry for the Art Bead category this month.  She tells me that she comes from a family of photographers and that she considers herself "an historian of light."  When she saw Emily Carr's Haida Totems, she tells me that it was the blues and special quality of light-- the way the twilight colored the scene-- that inspired her to make the Indigo goddesses.  She was also inspired by the deep woods setting of the Haida Totems,  You can see her Indigo Goddesses in her Etsy shop.  Susan describes her work as "interpreting nature in new and magical ways."
If you would like to see some of her photographs she has a Pinterest board  of micro puddles. 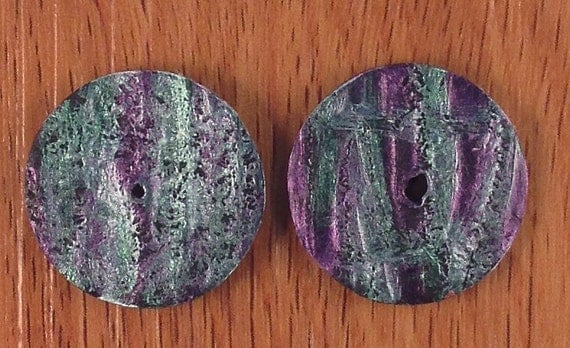 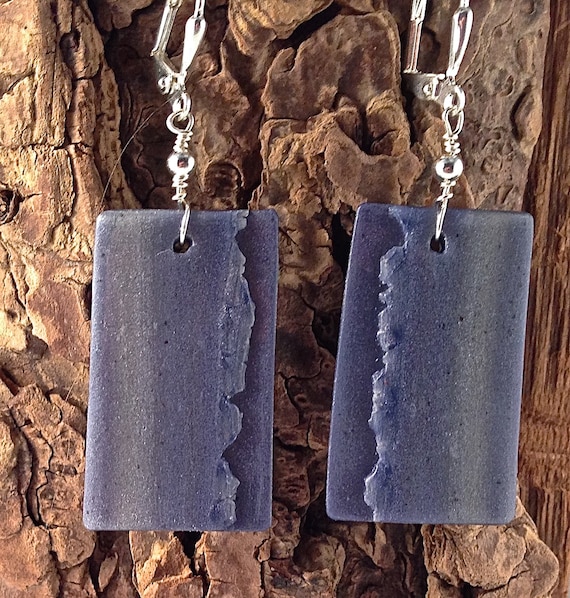 Haida Totem Primitive Charms by WinterBirdStudio
When I asked Asia, the artist at WinterBirdStudio, about her inspiration for her Haida Totem Charms, she told me:
" I'm from Poland but I live in Canada at present and I'm very familiar with Emily Carr's work, I also spend time travelling in the area that she was so influenced by in her later work, her paintings capture the essence of the British Columbia coast, the majestic trees, the misty air, the rugged landscape. I used pastels in my charms, love their misty, dreamy effect on the polymer clay and I tried to use texture similar to the carvings but still in an abstract form. " 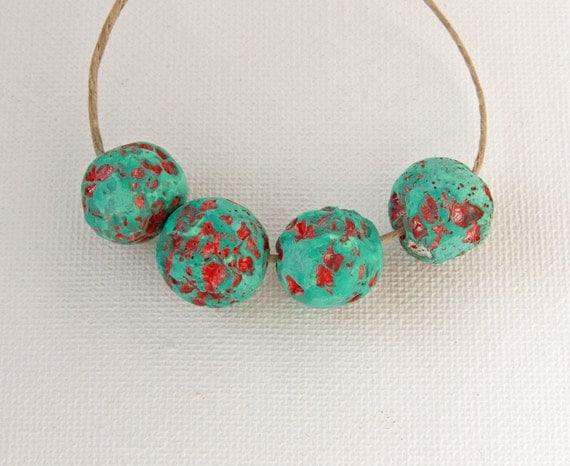 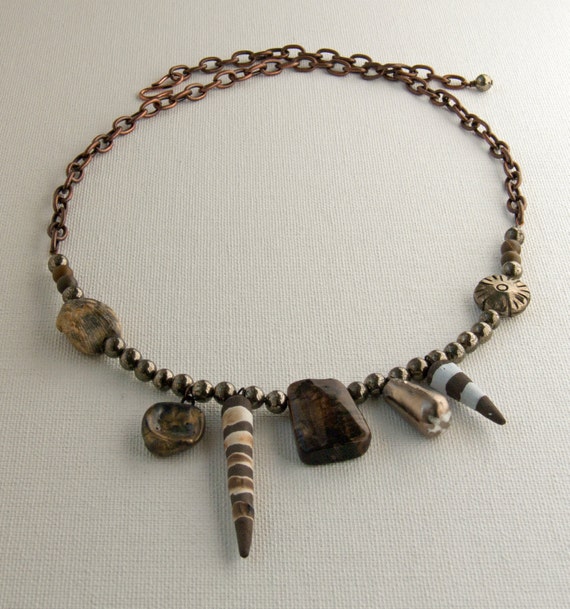 ++++++++
In 1912 Emily Carr set off alone on a momentous six-week trip, and eventually came to the remote settlements of the Haida people on an archipelago then called the Queen Charlotte Islands but now known as Haida Gwaii.  Here she found many fine totem poles ‘tragic and fierce’, and everything which surrounded her was ‘so vast and deep you shrivelled up’.

This story about Emily Carr was the inspiration for DitsyBlue's creation of the Haida House and
Totem beads pictured below. Totem Headpins by Ditsy Blue
You can find her work which includes both art beads, and jewelry made with art beads on Folksy.
You can also read more about her and her work on her blog where she talks about these beads and the necklace she made for the ArtBeadScene March Challenge.

+++++
I hope you have enjoyed meeting the art bead artists who created  work inspired by Emily Carr's Haida Totems.  Let me know if you would like to see a post like this again sometime.
Thanks so for stopping by,
Mary,

I love how carefully you listened to each of us to capture our unique selves and our unique approach to our art.

I'd love to see more of these posts!

It is a privilege to get to know the other artists.

I, too, would very much enjoy a post like this again. It's rare that I get to "meet" the artists whose shops I visit, or be introduced to others I haven't heard of. You did a wonderful job, Mary. I loved seeing all the varied work and having a chance to visit with the artists. Thank you for the time and effort you put into this.

This is an awesome addition to our monthly posts, Miss Mary! Such a wonderful way to spotlight the creativity of those that are inspired by our monthly challenge! Can't wait to read more! Enjoy the day. Erin

Susan, thank you for your kind words and encouragement to have more posts like this one.

Norbel thanks so much for your great feedback on this post. I so appreciate it.