Interview with Claire Lockwood of Something to do with your hands

Today, I thought I would introduce you to a great British bead maker and jewellery designer, and someone that I am lucky enough to call a friend Claire Lockwood of Something to do and Something to do beads. Like me, she is from the UK and not only makes the most incredible and inspiring art jewellery, full of texture, colour and of course, art beads, but also makes her own polymer beads. She is one of those people who I know that when I tune into her blog, on her facebook feed, I will find something unexpected and lovely to inspire me.

The wonderful thing about polymer clay is just how different it can become, depending upon the hands in which it is in. Claire has her own unique style within her art beads, and last year began selling them on etsy, so that we can all enjoy working with them. I asked her a few questions about her creative process.

Q1.How long have you been creating, and what led you to begin?

A1.  As a child and into my teens and early twenties I was very creative.  I was always drawing as a kid and this continued and I actually did two years of a Fine Art degree at Chelsea.  I’ve had health problems throughout my adult life and they first reached a head when I was at art college.  I took a year out and couldn’t face returning, so I took up studying Literature instead.  I’ve always felt a bit of a loss when I remembered all I got out of drawing and painting – and creating, in general.  I spent a long time avoiding thinking about what I’d given up.  Then, some years ago now, I developed an interest in vintage jewellery - all jewellery, really - and I eventually decided to try making jewellery myself.  So, I am now, finally, getting some chance to pick up the kind of interests I gave up.

Q2.What do you find inspiring?

A2. Sometimes I can just be thinking about something and it will occur to me that it might be translated into jewellery or beads.  Other times, I’ll see some neat thing and I think, ‘Ah! I could make a bead along those lines’.  I often work around a particular bead or material and take guidance from that.  I also love trawling the internet, and Pinterest in particular – it’s a wonderful source of ideas and inspiration.

Q3. Describe your workspace – are you lucky enough to have a studio set up, or are you like me and work in odd corners of your house?

A3. My workspace - if you can call it that - is one third(-ish) of my living room.  I have a large, cluttered table on which I make jewellery and beads and do whatever else requires a table (including eating, etc.).  Basically my workspace works around my living space and my living space works around my workspace.  I’d love to have a studio.  There are so many things I really want to do (have a kiln, do lampwork and metalwork - it’s a long list!) that just can’t be done in the space I have.

Q5.What are your favourite materials to work with and why?

A5. Well, I make polymer clay beads and I’ve just starting using a new system that allows you to give beads a metal coat on which you can develop a patina that you can also dye, so I’m loving that at the moment.  I can see so much potential in it.  When, it comes to making jewellery, I do like using art beads, in all sorts of media, and also vintage beads and components - I think they’d be top of my desert-island-beads list. 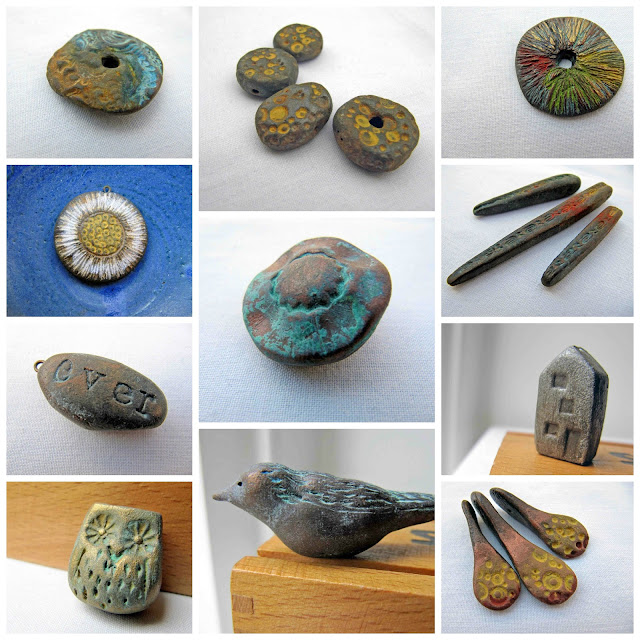 Q6 If you were to draw attention to a favourite designer or artist, who would it be and why?

A6  I’m really struggling to think of one individual, especially when it comes to jewellery.  My taste is really quite eclectic and diverse.   Rather than draw attention to any one person, it seems more accurate to say a wee thank you to all the many artists and designers from whom I’ve learnt some small, vital or very useful thing.  Some are people I’ve got to know via the internet, but there are many that I couldn’t name now, as I’ve just stumbled upon their work online. So, three cheers for the internet!

Q7 What drew you to art beads, and in turn to your specific medium of polymer clay?

A7 I think it was the case that I’d been beading for some time when I became aware of this ‘other type’ of bead that was out there, partly through seeing them being used in other people’s designs, and partly through seeing them for sale occasionally.  At the time I had no real idea of the vast realm of bead sourcing that is Etsy!  At around the same time, I saw a polymer clay demonstration.  I was immediately drawn to it and thought I’d give it a go.  I did ceramics for several years when I was younger so I figured it was something I might be able to do.  In time I discovered that, not only could I make beads to use myself, I could also make beads that other people might like to own too.

Q. 8 Can you describe a little (without giving away any trade secrets!) of your bead making process?

A. 8 On the whole, in the past, I think I’ve often started out with the idea of the bead I want to make in my mind before I start, rather than playing around with the clay to see where that takes me.  I don’t tend to use lots of the traditional polymer techniques, unless they will allow me to achieve the look of the bead I’ve imagined.  I frequently use the clay to create a sculpted base that I paint once baked.  One reason why I like this new patina system I’ve been using is that it’s given me the opportunity to experiment and develop my ideas whilst making.   It’s a different approach and I’m really enjoying it.

Q.9 Which art bead artists do you find inspiring?

A.9 Where to start?! I try to avoid taking too much inspiration from other people’s beads.  But, of course, when you see something you admire, you can’t help but be influenced by it – well that’s how I see it, anyway!  As with jewellery designers, I can’t really pick out one or two bead makers as predominate influences, but I can certainly offer a list of folk who just keep producing things I really love – although some of them are bead artists who create beads I love to use, rather than being an inspiration for my beads.  Oddly, none of them are polymer artists: Scorched Earth, Slate Studios Supply, Moogin, Grey Bird Studio, Jubilee, HappyFallout.  Of course, that list could be several times the length but you have to stop somewhere.

Thanks Claire, for sharing your thoughts with me today.

There is a bonus question and more pics over at my blog, if you fancy hopping over there!

And lucky for us, Claire is having a sale in both of her shops, through til the 26th June.

Rebecca is a Scottish jewellery designer, currently living in Manchester, England. You can read more about her and her work at her blog, songbeads.blogspot.com and see more of her jewellery at songbead.etsy.com. She also has a supplies shop at thecuriousbeadshop.etsy.com.
Posted by Rebecca at 8:25 AM

Love Claire's work! I like the organic nature and the variety of beads she uses in her pieces - so natural and eye catching. The Penny Button bracelet really draws me in with the soft, muted colors!

Your work is amazing! Great interview!

What a fabulous article, Claire. Very generous of you to share so much with us. Your new techniques and approach are working sooo well, and the results are fabulous! Too kind of you to mention me too. xo
Thank you muchly too, Rebecca!!!