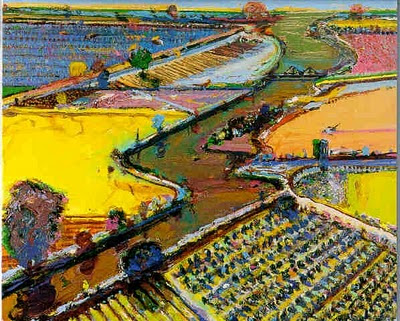 Brown River by Wayne Thiebaud
About the Art
"River-delta views from the Sacramento area, cityscapes from San Francisco and beach scenes from Southern California, no matter the subject, these works uniformly attest to the artist’s ability to sensuously manipulate pigment and capture clear light and vibrant color. It is this technical virtuosity, along with the artist’s tongue-in-cheek humor and ability to capture the realities of our place in time, that have helped to make Thiebaud a uniquely American painter."
About the Artist
Wayne Thiebaud (born Mesa, Arizona, November 23, 1920) is an American painter whose most famous works are of cakes, pastries, boots, toilets, toys and lipsticks. His last name is pronounced "Tee-bo." He is associated with the Pop art movement because of his interest in objects of mass culture, however, his works, executed during the fifties and sixties, slightly predate the works of the classic pop artists. Thiebaud uses heavy pigment and exaggerated colors to depict his subjects, and the well-defined shadows characteristic of advertisements are almost always included in his work.
His family moved to Long Beach, California when he was six months old. One summer during his high school years he apprenticed at the Walt Disney Studio. He earned a degree from Sacramento State College in 1941. From 1938 to 1949, he worked as a cartoonist and designer in California and New York and served as an artist in the United States Navy.

In 1950, at the age of thirty, he enrolled in Sacramento State where he earned a Master's Degree in 1952 and began teaching at Sacramento City College. In 1960, he became assistant professor at the University of California, Davis, where he remained through the 1970s and influenced numerous artist students. On a leave of absence, he spent time in New York City where he became friends with Willem De Kooning and Franz Kline and was much influenced by these abstractionists as well as proto pop artists Robert Rauschenberg and Jasper Johns. During this time, he began a series of very small paintings based on images of food displayed in windows, and he focused on their basic shapes.
Challenge Color Palette 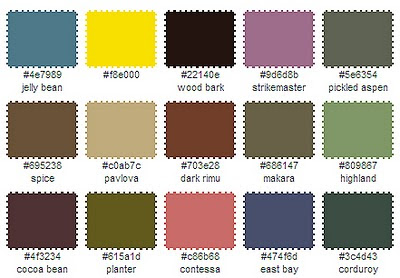 Blog Challenge
On January 30th we will host a blog tour of everyone who blogs about their challenge entry! To participate, blog about your challenge piece and leave a link in the comments below. Your link must be posted here by January 30th to be included in the blog tour. There will be a bonus prize for those who enter in the blog tour and a prizes for our readers!
The Prizes:
Winners will be randomly chosen from all the qualifying entries on February 1st.

Our sponsors this month are: Marsha Neal Studio, and Artybecca please visit us tomorrow to see the prizes!
Featured Designer of the Week:
From all the entries during the month, an editor is going to pick their favorite design to be featured every Monday here on the ABS. We want to give our participants more time in the spotlight! Our Featured Designer will be this Monday, so get those entries in soon.
How to enter the Monthly Challenge:
1. Create something using an art bead that fits within our monthly theme. We post the art to be used as your inspiration to create. This challenge is open to jewelry-makers, fiber artists, collage artist, etc. The art bead can be created by you or someone else. The challenge is to inspire those who use art beads and to see all the different ways art beads can be incorporated into your handiwork.
***Beads strung on a chain, by themselves and beads simply wire or cord will not be accepted.***
2. Upload your photo to our flickr group. Detailed instructions can be found here and click here for a tutorial for sending your picture to the group.

Please add the tag or title JAN ABS to your photos. Include a short description, who created the art beads and a link to your blog, if you have one.

Deadline is January 31st. Photos are approved by our moderators, if a photo hasn't followed the guidelines it will not be approved. You may upload 2 photos a day.
What is an Art Bead?
An art bead is a bead, charm, button or finding made by an independent artist. Art beads are the vision and handiwork of an individual artist. You can read more about art beads here.
***A bead that is handmade is not necessarily an art bead. Hill Tribe Silver, Kazuri ceramic beads or lampwork beads made in factories are examples of handmade beads that are not considered art beads.
Beaded beads, stamped metal pendants or wire-wrapped components are not considered art beads for our challenge.***
p.s. If you have a blog, post your entry and a link to the ABS challenge to spread the beady goodness.
Posted by Tari of ClayButtons.com at 6:00 AM

I will not be submitting, but I am posting it on my blog along with one of your banners. Deci http://gemtrails.blogspot.com/

Once again a beautiful piece and color palette for our inspiration!! Thanks!

Totally digging this color palette! I love the painting. And I love being introduced to painters I am unfamiliar with! I think the color palette is a nice touch.
Enjoy the day!
Erin

love this colors! i don't know this painter but it's a good occasion for know is work! And...it's time for try this challenge now !
Have a good new year!
ilenia

What a beautiful inspiration piece! I just finished my necklace and blogged about it here:

Thanks again for hosting this great challenge!

What a great painting...I have posted my challenge piece on http://art-with-moxie.blogspot.com/

Thank you for this wonderful challenge.

I love the colors in this painting. I blogged about my entry here: http://lindalandig.wordpress.com/2011/01/09/art-bead-scene-monthly-challenge/

SO excited about this one! Love the colors and textures of that painting. Here are my blog posts:

Since I love yellow and I'm trying to love copper I actually made two pieces for this challenge.. hopefully this is the link to my blog! http://islandgirlsinsights.blogspot.com/2011/01/abs-january-callenge-blog-tour.html

It's suppose to show up tomorrow however it was live a few minutes ago!

I created a piece and posted it on my blog
www.shaterraclaystudio.blogspot.com

Nice painting. Great colors. It has our creative juices flowing...we want to fit your challenge into our year long, daily upcycle commitment.

Here's the link to my blog post about my January Entry. Thank you!!!

(Sorry, in my previous comment I forgot to put a link to my blog!
http://www.leggendesegrete.blogspot.com/

I blogged about my entry at: http://mackin-art.blogspot.com/2011/01/aswirl.html

Thanks for the great inspiration this month.
Jen

Here is the link to my blog post about my January entry: http://beadsforbusygals.blogspot.com/2011/01/art-bead-scene-monthly-challenge-im.html

Just blogged about it!
http://treasures-found.blogspot.com/2011/01/art-bead-scenebrown-river.html

Art Bead Scene challenges are going to be my monthly inspiration. That way I know that I will have at least one new thing each month for Etsy! ;-)

Thanks for another great Challenge!
Here's my link to the Blog Tour:

What an interesting challenge! I'm so glad you decided to continue this for 2011. I am just finished with a new blog article about my entry... http://palumbojewelry.blogspot.com/2011/01/tada-364-kahlo-art-bead-scene-oh-my.html Thanks for your inspiration and wonderful articles!