The Storyteller Tells Her Story. Part the Third.


In this third and final post installment continuing my on-line conversation with Nina Bagley, I went even further beyond the questions from the set that are usually asked of Jewelry Designers on Art Bead Scene blog, past her inspirations, aspirations and what's next for her designs, and directly to a subject that has some controversy and is thought-provoking for all of us who are creative makers, about the role of teachers and students, and the sometimes difficult path to finding one's own voice and expression.

As many of us do, Nina has a request on her blog reserving her original photographs and words against use without her permission.

Nina teaches at Artfest, Valley Ridge Art Studio in Wisconsin and at Art and Soul Asilomar in 2009 and recently returned to her home from teaching in 2008 at Ocracoke, so she has a deep well of experience from which to speak about this topic.

Nina did not back away from having a very frank discussion about this highly debated and well-considered issue. I've seen well-known jewelry design magazines and publications devote large parts of their 'Letters to the Editor' section discussing the boundaries and limits of copyrights and respect for others' originality of design. Nina has been deeply involved in this thought process, and here's what she shared about the subject with all of us. 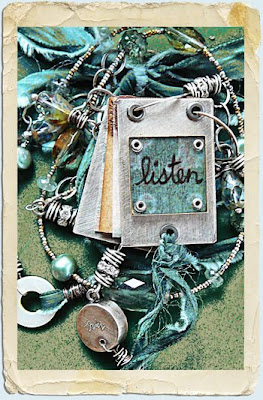 ABS: When you teach your methods and processes to others during your classes, you are sharing a lot of information and insight into how you work, and those who learn from you will be applying those methods to their work after the class.

How do you encourage the process of finding one's own voice to express new ideas?


Okay. Are you ready for my soapbox?


This is a very sensitive subject for me, and one in which I take a very strong stand. This stand has cost me friends, blog readers, and relationships with a certain magazine in which I once frequently published my work.


It is a subject that has also caused me to step back, reevaluate the teaching part of my income and has caused me to reach the very risky decision of cutting greatly back in that regard. I do teach techniques, and have been told by countless students that I am very generous with what I share. My classes fill without fail, so I know that I’m satisfying their needs, I know that they’ve left the workshops happy and rewarded, because there are many, many loyal students who return again and again to take my classes. 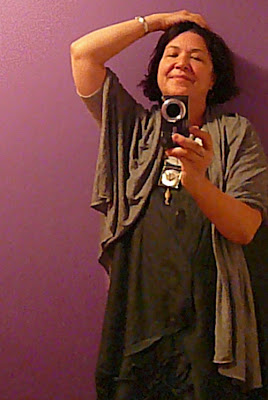 What bothers me deeply is the level of imitation that I’ve seen surface in this art community in the last couple of years. There is a similarity of style out there now that greatly resembles my own designs, and I find myself questioning which came first – my work, or theirs?

There have been quite a few instances of students taking my workshops, then proceeding to submit artwork and instructions for magazine publication. There have been workshop designs that have been submitted while I’m still teaching that project, that design, and the publishers have no problem publishing these knock off “creations”, in spite of my consistent protests.

Yes, I teach techniques; yes, I encourage students to go forth and make designs of their own. What I do not encourage, and what I warn against, is a student leaving a workshop and then beginning to create jewelry that is alarmingly similar to my design in style, in “feel”.

I’ve written publishers regarding this topic, and have been completely ignored. I want people to create after my workshops, very strongly; what I want even stronger is for them to develop their own style, one that is uniquely their own. What is so wrong, so selfish, with that?

Yet I’ve been talked about with great disdain over this topic, over my taking a firm stand for what I believe is morally wrong.

And with this, I heave a huge sigh. Writing these words will most assuredly just stir up more grief and conflict, will cause uproars in certain little circles. It hurts when I’m accused of being “mean”, when I’ve ridiculously been threatened with a lawsuit, when I receive the occasional nasty anonymous letter, when an acquaintance calls me long distance several times and urges me to confront certain designers, and then inexplicably turns on me.

Someone wrote a comment [on my blog] that I should “expect” my designs to show up in students’ work if I teach classes, that I should stop complaining. And my response to that, as I’ve already said, is that I teach techniques – not style.

And now, those very same designers are now teaching classes, with the same style and techniques, of their own.Thankfully, those people are few, and I stand firm in my conviction … part of the price of being published with frequency, I suppose, for all these years, of filling classes successfully, of selling my jewelry consistently.

But the conflict is a very uncomfortable and difficult burden to bear. 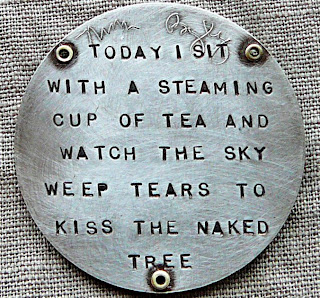 ABS: Thank you so very much, Nina, for the insights and background about your beautiful handmade jewelry, hand bound books and all your other inventive creations, and for being willing to discuss every kind of topic without withholding.

It was such fun thinking about questions I'd like to ask you if we were sitting down together at tea, and you answered so generously, honestly and graciously!

Lynn, thank you for inviting me to be interviewed; and thank you for asking such insightful, thought-provoking questions. It was a pleasurable way to spend the greater part of my Sunday morning.

Now? On to cleaning up that studio!!!! xo

This concludes the three-part interview with Nina Bagley for Art Bead Scene, I hope you've enjoyed it and it has caused you to think about things you might not have considered, and sparked new sources of inspiration. I was privileged to have this conversation with her, and look forward to all her new designs and ongoing creative outpouring in 2009.

Posted by Lynn Davis – with deep gratitude to Nina Bagley for her participation and her past, present and future gifts - All photos courtesy of Nina Bagley (copyright 2009)
Posted by LLYYNN - Lynn Davis at 7:01 AM

I wanted to say thanks, again, to Nina for answering so many questions from someone she's never met. I read her blog, as do many of you, and also read the comments that are left on her blog.

I believe there is room for discussion about the question of 'imitation' vs 'inspiration' and the role and responsibility of teacher and student.

We don't all have to agree completely. Some things are probably obvious. If you see a design created by another and you copy it exactly and call it your design, most would agree that's not proper. If you create a design and decline to teach how it's created, and someone emulates it exactly and does teach it to others as their own, most would agree that's not ethical.

Something along those lines has happened to most of us, at one time or another. I've seen photos of work I know belong to an artist show up in the most unlikely places.

I believe it can be a matter of the 'mirror' rule - if you can look yourself in the mirror and feel happy about what you're doing. It's also open to question of the 'Golden Rule' - would you want someone else to do it if it was your design?

I've seen large, well-known bead design magazines devote columns examining these questions, and letters to the editor stating that they have published designs being taught by them and shown as someone else's original design.

Let's have an open conversation, friendly and in the spirit of this blog, about the interpretation of 'inspiration' vs 'imitation' and the idea of finding and expressing one's own particular special voice.

I have a quotation on my blog that I really like, from Robert Bresson: "Make visible what, without you, might perhaps never have been seen."

And another by Eleanor Roosevelt - "No one was ever great by imitation."

Also - thanks to Heather Powers for allowing this discussion and not dodging the question - I appreciate her allowing me to do this series. I hope you have enjoyed it. Lynn Davis

Lynn, this was a fantastic article and I've enjoyed all three days of it. As a teacher & designer, I agree totally with Nina's views on imitation. And it is difficult to go out there to teach & try to get students to develop their own "voice", but I think if we keep our convictions strong we can do it, even if it's only a tiny bit. Thanks again!
Theresa

i have been lucky enough to have a class with nina. while she teaches the technique, skill and process we can use in our own work, what she also teaches is the importance of being comfortable outside the box...of feeling secure enough of what is inside of us to bring it out to share. she has a talent for putting at ease those of us who are just testing our wings. while it is ok for us to use the process she's taught, it is up to each individual to put their own personal touch on their art, based on what is inside each of us and what our experiences have been. the art, be it jewelry, fabric, books, painting or some other form is a direct expression of what is inside the artist...and while we may love what we see, duplicating it is, in essence, denying our own creativity in order to adopt that of someone else...it is simply giving up your individuality. i applaud nina for refusing to compromise. thanks for such a great interview.

Bravo ninA!!! So beautifully and eloquently said. Sticking by your standards and your xpctations for Fair Play is NOT easy!! You are sucha wonderful model for so many of us- I fear that you don't hear from us enough!!I have not been lucky enough to spend time with you in a class but I read your blog and I did ride in a elevator full of laughter at Art and Soul in VA- a ride that I will not soon forget!! You are the epitome of what is right and good in the creative arts world- don't change for nothin nor nobody!!!!!!!
Hugs!
Elizabeth

I'm such a fan of Nina Bagley...thanks for sharing this.

It is indeed a difficult issue in teaching. As a teacher myself, I find that I have to go through a lot of "letting go" of what I instruct others in. I understand completely, Nina's strong views on this. Sadly, I think that it's inevitable that the feel of one's art will be imitated when you teach.

Another thing that I'm sure she's heard before, is that imitation is the highest compliment. Her style is just so beautiful and such a strong style, the techniques were so different, that when they were first seen, it deeply influenced a lot of people and perhaps a whole movement in jewelry making.

I was unaware of the conflicts that she's had but it is one of those unavoidable things in art and I've seen it happen many many times in different mediums.

Thanks again for the interview!