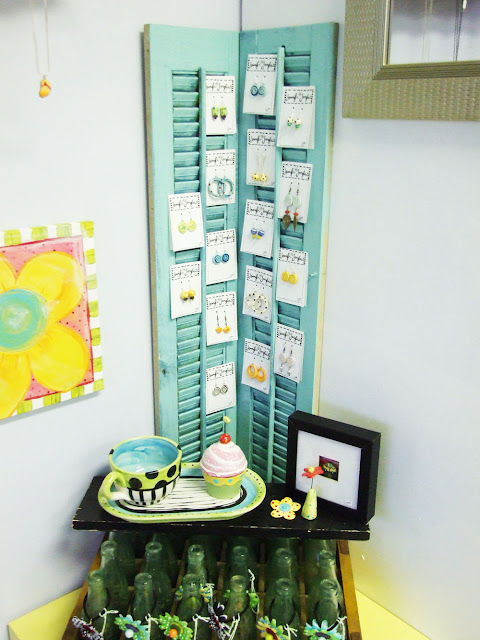 It's spring and I bet a lot of you are working on new displays for your upcoming shows and sales. I thought I would pass along a display idea for earrings that I use in my new store. I found it to be super easy to move pairs around with this one.

I found these great cafe shutters at my Habitat Store. They were a couple of dollars so I bought several sets. First I washed them, and then gave them a good coating of paint. It was a light turquoise. Once the first coat dried, I took a dry brush with some darker blue and painted it on. I tried to brush it on lightly so it would have a worn look. Once they dried they were all set for my display. 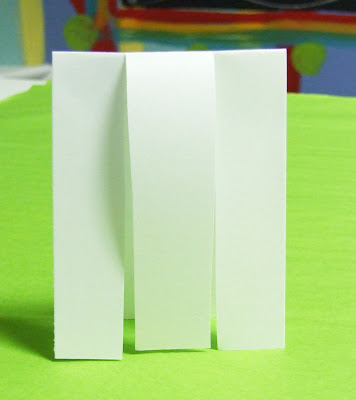 It was then time to make my earring cards. I usually make my cards one layer thick but for these cards, I made a long rectangle, folded it half and printed the usual card graphics on one side. If you are using large shutters, at this point, your cards will most likely slide into the slats of the shutter. Since my shutters were small, I needed to cut slits in the back of the card. I then could slide the middle strip between two slats.

You wouldn't need to use this display just for earrings, you could card small pendants or pins just as easily.

This post was written by Jennifer Heynen a.k.a. Jennifer Jangles
Posted by JenniferJangles at 12:51 PM

Hi Jennifer, Happy St.Paddy's Day, you are just full of wonderful ideas i love to display my jewelry in very unique ways so thanks for the idea. I recieved my goodies that i order and they are amazing in person. i can' wait to make some rings with thos cute button beads and they came packaged just a a little gift i loved it! ttfn L:)

I love that shutter idea!! I like your earring cards too! How do you punch the holes in the cards? Do you use a hole punch or something else?

what a super idea and your display is fabulous looking.

Wonderful! After discovering some of these at the local flea market some years ago, I have used this display technique as well. One thing to note, however, is that the "tail" of your earring cards (that goes into the slot) needs to be sufficiently long enough to support the weight of the earrings, with some room for error. If not, you'll be chasing fallen earrings the whole time during your show. I learned this the hard way. :-)

What a great idea! I'm trying to redo my display with a fresh new look and may have to borrow this idea.

I love the shutter idea!
Thank you so much :)

Your shop look fantasitc too, so bright and cheerful!

This is just adorable and a nice way to add height to the display.

You can get full length one's made for bedroom doors that (if you have a truck) are GREAT for doing craft shows :)