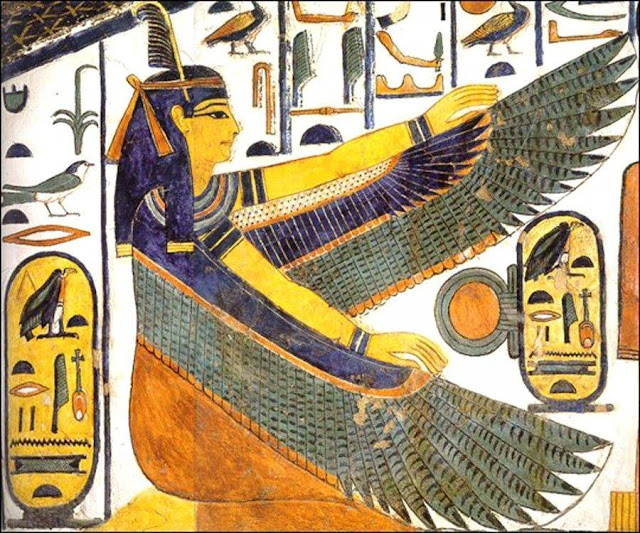 About the Art
Depictions of mythological deities were painted in the tomb of Queen Nefertari. The winged goddess Ma'at is the symbol of truth, order, law, morality and justice. Queen Nefertari lived around 1300-1255 BC and was the first wife of the Egyptian pharaoh Ramses II. Her tomb was rediscovered in 1904 by the Italian archaeologist Ernesto Schiaparelli. It is located in the Valley of the Queens, near the ancient city of Thebes, Egypt. It is one of the best preserved and most ornate of all known tombs. In 2003 the tomb was closed to the general public.
There to receive the queen's offerings are three goddesses: Isis; her sister, Nephthys; and Ma'at, squatting with outstretched wings. The sisters are seated on imbricated throne bases, but only Isis wears a beaded dress. Nephthys is clothed far more simply in a green ankle-length shift.
Ma'at is shown in a red dress, her green wings extended to shield the queen's cartouche. Next to it, a shen ring reminds us that the cartouche derives from a modified shen sign. Behind Ma'at and set apart from the scene by a narrow painted band is a partial titulary of the queen: "king's great
wife, Nefertari, beloved of Mut."
The cartouche behind Ma'at integrates well into the body of the text and does not seem an afterthought.


About Nefertari and her tomb
Living in the XIXth Dynasty (c. 1295-1255 B.C.), her full name was Nefertari Merytmut, meaning "Beautiful Companion, Beloved of Mut". She was the Great Royal Wife of Ramesses the Great, one of the best known of the Egyptian queens, next to Cleopatra, Nefertiti and Hatshepsut. Her tomb, QV66, is the largest, most lavishly decorated and spectacular in the Valley of the Queens. Ramesses II also constructed for her a temple at Abu Simbel, next to his own colossal monument. He even made the size of her statues, on its facade, to the same scale as his own.
Nefertari's origins are unknown, but discoveries in her tomb, which include a cartouche of the Pharaoh Ay (found on a what was either a pommel of a cane or a knob from a chest), suggest she may have been related to rulers of the 18th Dynasty, included Tutankhamun, Nefertiti, Akhenaten and Ay. She married Ramesses at age of thirteen, who was himself only fifteen, before he became pharaoh. She was the most important of his eight wives for at least the following twenty years. She died sometime during the 25th regnal rear of the reign of Ramesses and the reason for her death remains uncertain.
Although she had at least four sons and two daughters, none of these succeeded to the throne. The heir to the throne of Ramesses II was Prince Merneptah, his 13th son by another wife, Isetnofret.
Not all of the names of the 100 plus children of Ramesses are known, and in many cases their mothers cannot be identified with certainty. The following children can be attributed to Nefertari:
• Prince Amun-her-khepeshef, crown prince, commander of the troops.
• Prince Pareherwenemef.
• Prince Meriatum, high priest of Heliopolis.
• Prince Meryre.
• Princess Meritamen, chantress of Amun and priestess of Hathor.
• Princess Henuttawy.
There could be others.

HER TITLES
• "King's great wife": this, and the following three titles, identifies Nefertari as pre-eminent among the eight known wives of Ramesses II.
• "King's great wife, his beloved",
• "Wife of the strong bull",
• "God's wife",
• "Mother of the king", this confirms that one of Nefertari's sons had been chosen to succeed                   Ramesses.
• "Hereditary noblewoman", this indicates that Nefertari came from noble stock.
• "Great of praise",
• "Mistress of charm, sweetness and love",
• "Mistress of Upper and Lower Egypt": this, and the next two variants, indicates that Nefertari               exercised some role in state affairs.
• "Mistress of the two lands",
• "Mistress of all lands",
• "Pleasant in the twin plumes": this refers to her preferred twin-plumed headdress, the same as the         one worn by the god Amun.
• "For whom the sun shines": a unique inscription from the façade of her Temple at Abu Simbel.
• "Great of favours": possibly indicating some judicial role which she held.


Our Sponsors
Our Sponsors this month are Diane Hawkey and Something to do With Your Hands.
Please visit us tomorrow to see the prizes!

How to enter the Monthly Challenge:
1. You need to have a Pinterest account. Go get one ASAP if you don't have one already. It's easy, fun and inspiring.

3. Two ways to pin your entry to the board.


Create something using an art bead that fits within our monthly theme. We post the art to be used as your inspiration to create. This challenge is open to jewelry-makers, fiber artists, collage artist, etc. The art bead can be created by you or someone else. The challenge is to inspire those who use art beads and to see all the different ways art beads can be incorporated into your handiwork.


An Art Bead must be used in your piece to qualify for the monthly challenge.

Please add the tag or title SEP ABS to your photos. Include a short description, who created the art beads and a link to your blog, if you have one.


Deadline is October 31st.
You may upload 2 entries per month.

• Beads Makers Pinterest Board-Art beads must be created by you and fit the Art Bead Scene's monthly challenge theme. They can be made for the challenge or ones you have made before. 2 entries per month are allowed.


Monthly Challenge Recap
• Please post at least one single shot of your creation on the Pinterest Board. This will be used to make a collage for the Monthly Challenge Gallery. Every creation will be added to the collage, regardless of a blog post. So everyone gets included!

• Be sure to share with us the name of the art bead artist in the description of your photo so that if you are selected for the weekly Perfect Pairings on Wednesdays, both you as the designer and the art bead artist can get the credit you both deserve!

• An InLinkz button will be added to the bottom of the Monthly Challenge Recap post. Here you will be able to link up your blog post if you have one. It is no longer necessary to add your blog post URL to the description unless you want to. Be sure to hop around and see all the great inspiration and leave some comment love!

• The Monthly Challenge Recap with Blog Tour will be posted on October 31st.


Monthly Challenge Winners
• One prize winner will be selected at random from all pictures posted on the Pinterest board.

• One prize winner will be selected at random from all blog posts added to the hop for the Monthly Challenge Recap post. So if you want to be in the pool for the second prize, be sure to use the InLinkz code at the bottom of the post to share your process and inspirations!

• Winners will be randomly chosen from all the qualifying entries on November 1st.

• From all the entries during the month, an editor will pick their favorite design to be featured every Wednesday here on ABS, so get those entries in soon.

I have been struggling to find time for the monthly challenges, but this one looks irresistible!