Welcome to Studio Saturday! Each week one of our contributors gives you a sneak peek into their studio, creative process or inspirations. We ask a related question of our readers and hope you'll leave comments! As an incentive we offer a free prize each week to bribe you to use that keyboard. The following week we choose a random winner.This week's winner is Beadbabe49, who has won a teal bird bead from Heather Powers. Please use the suggestion box on the sidebar to send us your address. 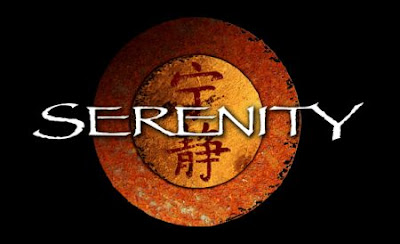 Serenity, Definition:
Noun
1. a disposition free from stress or emotion
2. the absence of mental stress or anxiety

Also, from Wikipedia, :
Serenity (film) is a 2005 space western film written and directed by Joss Whedon. It follows on from the canceled Fox science fiction television series Firefly, taking place about two months after the events of the final episode.[1] Set 510 years in the future, Serenity is the story of the captain and crew of a transport and cargo ship. The captain and first mate are veterans of the Unification War, having fought on the losing side. Their lives of petty crime are interrupted by a psychic passenger who harbors a dangerous secret. 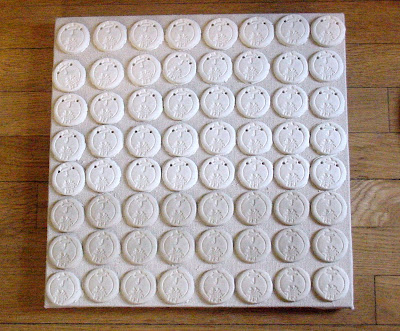 It is spring crunch time here at Earthenwood Studio. It is easy right now to become overwhelmed. I have many orders to fill, projects and articles with deadlines looming, and the added stress of preparing for the Bead & Button show in just over a month. Suffice to say, *serenity* is in short commodity here.

Serenity as defined in the first definition shown above, that is. But the second definition, about the film Serenity, is very abundant in the studio. You see, a few months ago, I was commissioned to create some pendants to be used as fundraising. The group commissioning them is active in the Serenity film fan conventions, called Shindigs. These Shindigs, like the Raleigh NC one, sound like a fun way for fans together and enjoy one of their favorite shows/movies. But they also work to raise money for a great charity helping women all over the world called Equality Now 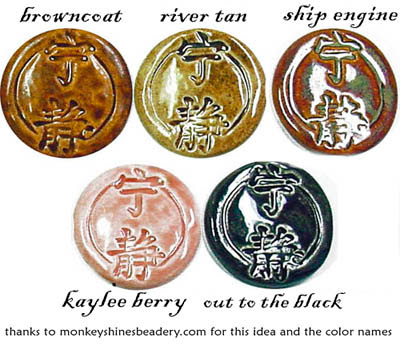 So when I learned about this event a few months ago, I was excited to be a part of it. And now is production time, as the groups are getting ready for their upcoming Shindigs. And even though it is one of my busiest times of the year, knowing that my work is going towards a great event and cause like grants me much personal serenity. 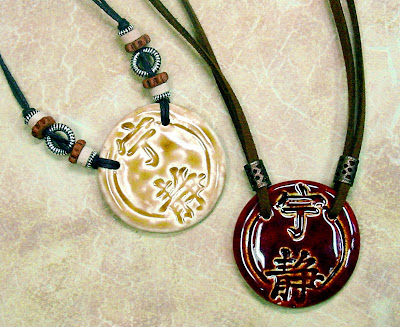 My question to you is this: what brings you serenity? For me it is working on worthwhile projects that help others and quiet moments spending time in nature, where I can catch a breath. Leave your answer in the comments section and next Saturday, one winner will be chosen. The prize is a serenity medallion pendant of your own.

And as a blog bonus, stop by the Earthenwood Studio Chronicles later today for some budget saving ideas for making simple yet high quality finished jewelry for fundraising events, like the pieces shown above...

Posted by melanie brooks at 9:50 AM

So, what brings you Serenity?

Beading brings me serenity, so I need to do more... because I'm feeling anything but serene right now!

Actually, the idea of being free of mental stress or anxiety is pretty foreign to me. I'm buying a house! There's a LOT to stress about! ;)

What would bring me Serenity right now would be knowing where I could get one of those pendants! Amazing on so many levels. :)

I take my serenity day by day. Today's serenity comes from the sounds of a Mourning Dove outside my window as I sit here at The Bead Table trying to get things done. The wind blowing through the new leaves on the walnut tree is also a great source of calm today.

Tomorrow will be something different.

AJ, Beading does bring me serenity too, most of the time. And I hear you on the house buying! Very stressful!

Joy,
Thanks for the compliment! I just added these to my website today:
http://www.earthenwoodstudio.com/html/awareness.html

That is a lovely way to look at things...

Beading, when I'm alone brings me serenity. Listening to the ocean, quiet classical music, and being way high up in the mountains all have the same effect on me.

Your pendants are awesome. It would be hard to pick a color.

I love the pendants! I'm a big fan of Serenity, both types. Although I'm more likely to watch the movie than actually enjoy a moment of peace and quiet.

I find I'm most at peace near water, the beach will always feel like home. Creating projects just for myself is another source of peace.

Now I'm off to check out your website. I need one of these. And the names, too perfect!!!

Hagen Daaz's limited edition Caramelized Pear and Toasted Pecan ice cream, a cold beer (pale ale to be particular), and a worthwhile project in front of me.

Serenity to me is when all is well around me. There is no drama in my home. It is the best time for me to relax and let my inspirations flow, it is then that I usually make my most interesting pieces~my creativity flows as water flows. Serenity also is with me when I am designing a piece that will be a gift~I desire that person to be happy. Friday, I had the opportunity to bead on the beach, surely, that was very serene.

I just looked at those lovely pendants. Melanie, they are just great! Serenity would definitely be to own one. It's awesome of you to be doing that project. I live about 40 minutes away from Raleigh, NC. I'd like to check out that event too.

serenity is spending time with my family, laughing together, working on jewelry and beads, sitting in a bookstore with a pile of magazines to leaf through while sipping the perfect mocha with extra whipped cream...

Serenity? Creating. Writing. Looking at Spring blooming all over. Contemplating Nature. It is a beautiful spring, isn't it?

Serenity by defination is "free from stress or emotion?"

When I feel what I have thought of as serenity, I too feel emotion.

I have a special secret beach spot where there is an abundance of seaglass. Putting my water walkers (shoes) on, I head that way. The sight and feeling of the water, the sound of it lapping on the shore, the feel of taking the weight of the world off of my body when emerced. This is very emotional. Finding the elusive colors of seaglass that take front and center in my curio cabinet. Twice, in this special spot I have found huge rocks (too big for me to carry), one with crystals inside seen only by a tiny hole and another that is almost all quartz.

I had to bring some muscle with me to get these finds home. Both found as though I was lead to them on those two days.

I think that thinking on this subject is the temptation to continue writing, therefore I shall sign off.

Great subject to consider. Helps one to see the blessing in the seaweed of the day.

Serenity = my daily morning walk. It's my time to be quiet, enjoy the visuals of Spring, not think about daily stresses! I find I use all of my senses- hearing the sounds of the birds, smelling the magnolia trees that line my street, seeing all of the blooms, feeling my thigh muscles getting stronger as I hike up the hills in my neighborhood! lol
Melanie, your pendants are beautiful and I'd be so honored to win one!

Warm coffee on a cold day. Petting my cats. Playing with beads. Reading a good book.

Serenity is where you find it LOL

Serenity is working with my horses, especially grooming. There is something about the non-verbal communication you get with physical contact. And there's nothing like the cosmic connection you get with animals and nature to get that feeling all is well. Of course fondling your favorite bead can be almost as comforting. Just writing about it all makes me relax:)
Your pendants are great!

Serenity for me is when I am beading, especially when I work on my crochet bead ropes. As I crochet each bead, I feel quietness coming over me bit by bit (or should I say bead by bead?!), draining away the tension and stress of raising children and running a household.

I write Chinese characters in a note book for my son to practise each week for his weekly Chinese spelling test. And writing them stroke by stroke in the correct proportion is precious serenity for a few moments. A serene mind creates perfect & proportionate characters. How appropriate that you use Chinese characters for your Serenity pendants!