My interviewee today is a bead artist I have admired for some time now. Her shop was one of those happy and rare Etsy finds, which have you thinking, 'Oooo, look, that's a bit different... and a bit fabulous!'.  You may know her as Donna Perlinplim, the monicker of her shop, or as Kathrin Kneidl.  She has a style that is full of eclecticism,  yet all her pieces are immediately recognisably hers.  Having built up quite a hoard of her beads, and having developed a weakness for checking her shop regularly to see what is new, I was more than a little intrigued to find out more about Kathrin and her work.

How long have you been working with clay and how did you first get into it?

I have been taking classes in ceramics ever since my college days in Berlin - that's were I am from originally. It all started with a friend who had a friend who was teaching, so we went together to give it a try and I got hooked. Only I never seemed to know what I wanted to make. ‘Make shoes’, my Dad suggested. So I made lots of weird big shoes.

Pretty soon after that I left Germany to live in England and later Israel, little knowing that I took the love for clay with me, like a precious seed that needed to be planted when the time was right. 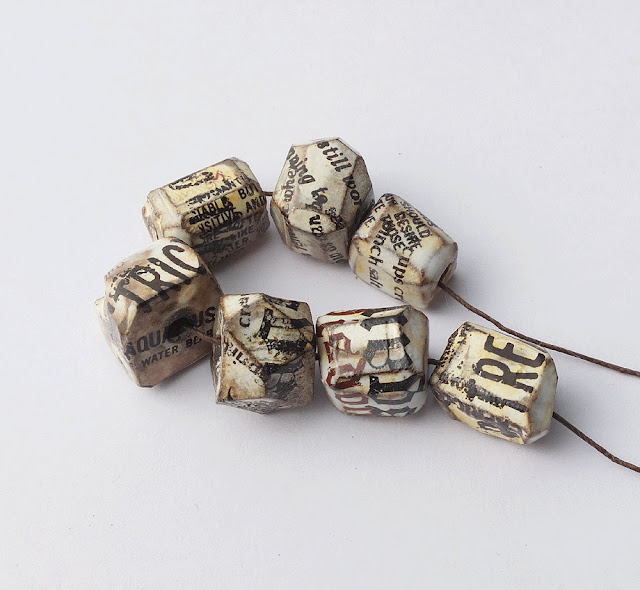 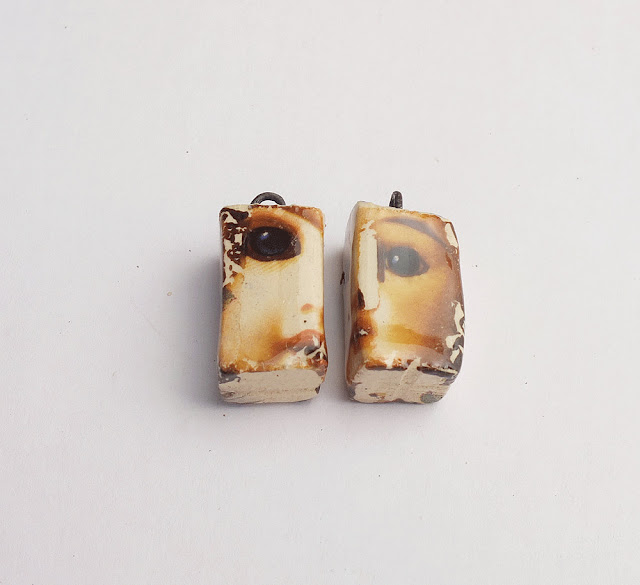 What lead you to start making beads?

At the age of 30 I made a drastic geographical and career change. I moved to Israel for love and
worked as a goldsmith for some years. I had dreamt about that also. For a long time I wanted to be a goldsmith but when I had learned and worked like many times before, I got bored with it. Something was missing in my life: color and creativity. And that's when I discovered that one could make beads, glass beads at first. I was one of the first in Israel who learned to make glass beads and actually sold them but I also was (and still am) a terrible business woman. I won't go into that; it’s a painful subject. The best shot I had at selling was on Ebay auctions where I was spared the embarrassment of pricing my beads. But that was when Ebay was still fun and one could find cool stuff there without ploughing through a gazillion reseller shops.

The whole time however I was taking evening classes in ceramics and dreaming of an ideal world where I wouldn’t need money and could just be playing with clay all day and all night. Somebody had given me a small kiln which gave me the idea to make ceramic buttons. From buttons to beads it was just a small step. I dismounted my lampworking torch, gave away most of my glass rods, and used the free space for new adventures with clay. 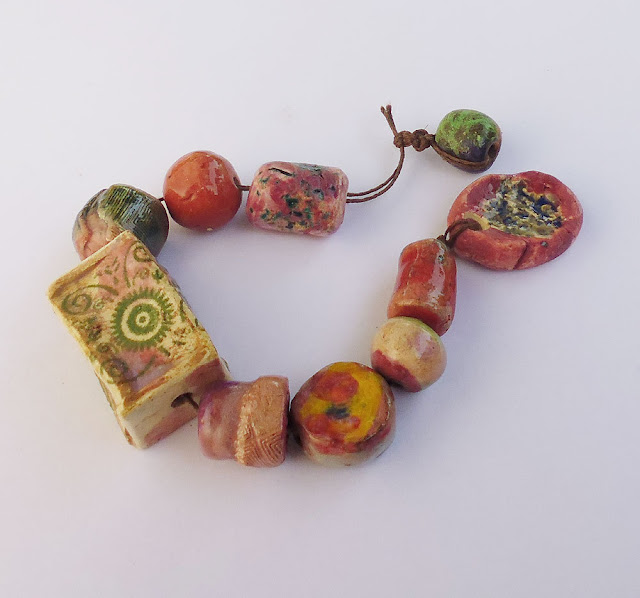 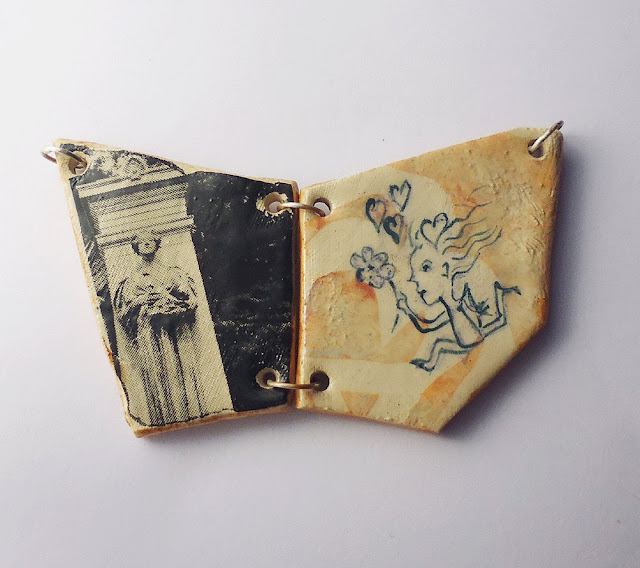 Do you ever make jewellery or do you prefer just to make beads?

To see the finished beads always inspires me to make more beads, with that the creative process ends for me. When I made the glass beads it was a chore for me to string them into necklaces and bracelets for shops. I was always happy to give a heap of beads to friends or the kids to string them for me and they loved doing it. A win win situation, like now. I make the beads and talented artists like yourself make them sing.  It’s awesome. What you come up with I could never think of. 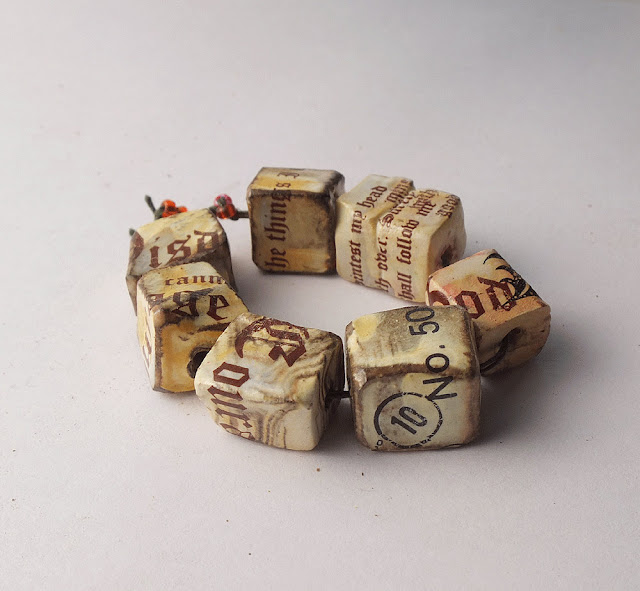 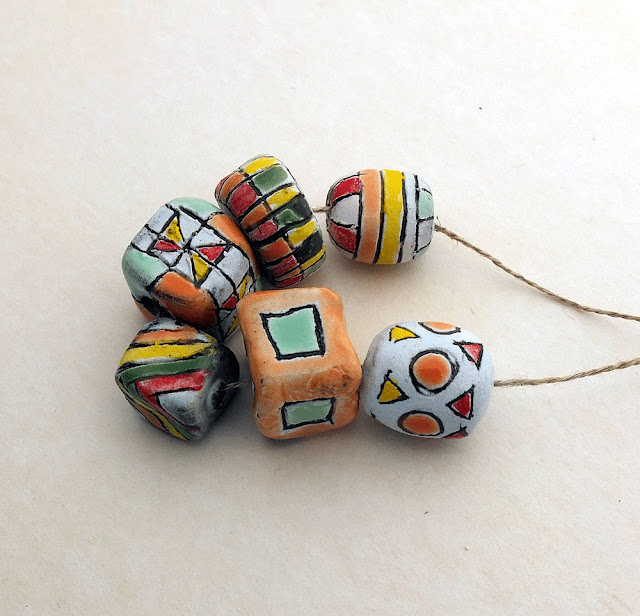 Do you work on your ceramics full time or do you fit it in alongside another career?

I have another shop on Etsy, Resplendent Rags where I sell my OOAK dresses, which are just like the beads. Quirky and unpredictable, on the verge of being too weird. It’s not always easy to coordinate those two passions; they behave like jealous lovers and I tend to feel guilty towards the one I neglect at the time I am busy with the other. At least I managed to reduce myself from many more creative interests. No humble-bragging intended, it is a serious obstacle to do too many things, consequently getting nothing done. Let alone make ends meat. 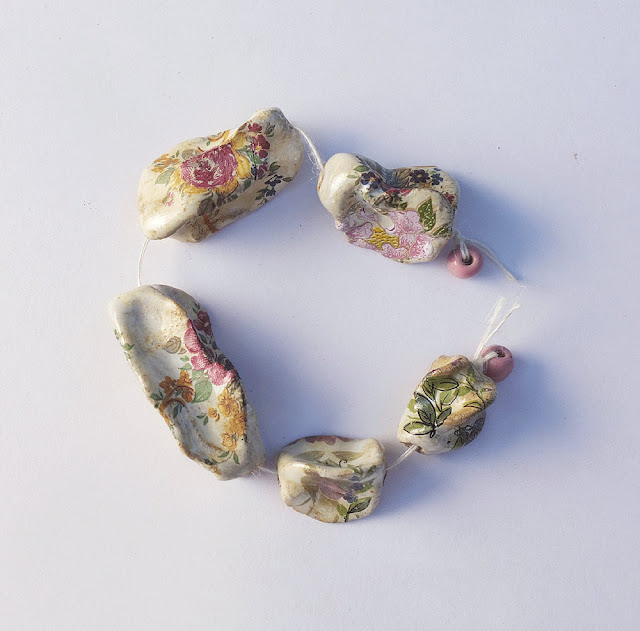 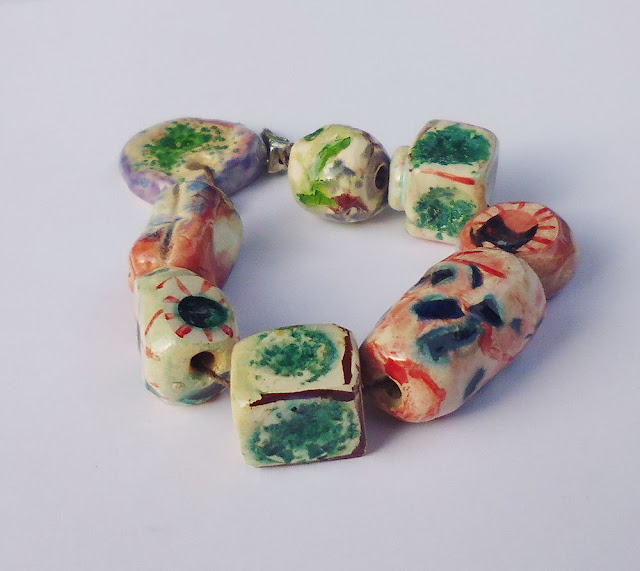 You have a very particular style that I find really appealing, but I’m not sure how exactly I’d describe it. How would you describe it?  Would you say you have a wider aesthetic that informs what you do?

If we mean the same thing by wider aesthetic I believe this is necessary for anything of value.
It is certainly not something I could claim for myself, hence have it. Sometimes I can go to that place where  I lose myself in what I am doing and whatever comes out of that state feels right somehow. As children when painting or playing we are at home in that place, in that Garden of Eden where one is in bliss, untouched by the world.

I remember precisely when I got kicked out of that realm, when one day I had lost the freedom to paint and create and started to be critical and competitive in everything I did. Later, in college (I studied fashion design), we were all killing ourselves to think up something original, breathtaking. Nobody knew anything about how to teach creativity.

But when did the ideas came? In dreams, or when I was able to let go. Meditation is a great way to creativity. I get still angsty when I think about having to make something. Every time I forget that this place is always there, it never leaves us and anybody can go there. The late German artist and anthroposophist Joseph Beuys stated once: ’every person is an artist.’  I totally believe in that... 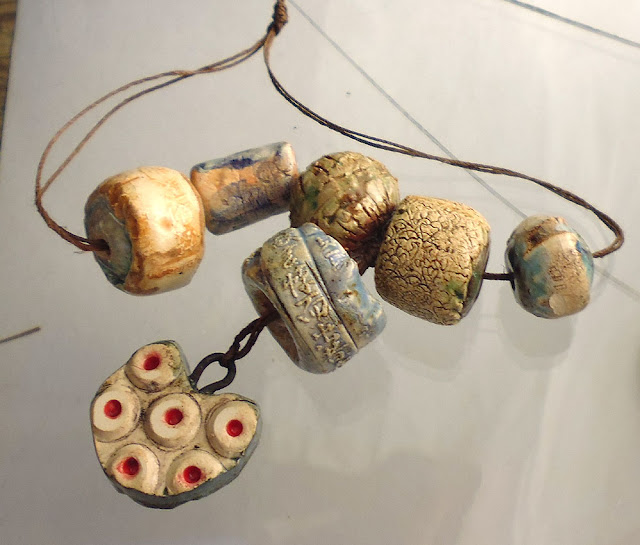 I see you make other, functional pieces (including some fabulous mugs!), as well as some decorative items. Can you tell us something more about this side of your work and how it relates to your bead making?

Before, when I had the wee kiln I thought it would be wonderful to make mugs taller than 10 cm. When that kiln broke down I was forced to buy a new one. An opportunity came up and suddenly I was looking into this abyss of a kiln. Now what? How am I going to ever fill this up with beads?
In order to be able to fire my beloved beads I have to make larger objects. Tough luck.
I am not complaining: it is great to have more freedom, not to be restricted so much in size. Yet it always amuses me how every dream realized comes with stuff that wasn’t part of the dream.

Another good thing if someone likes my style but has no use for beads, he or she could enjoy a mug, a tile or even a dress. 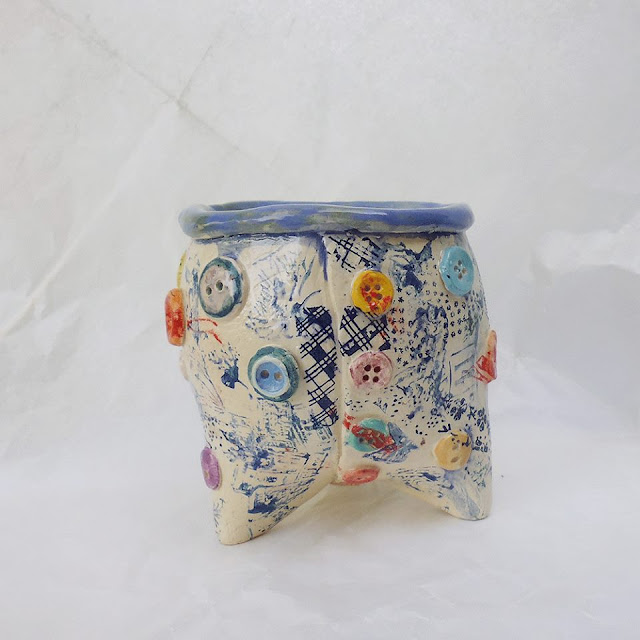 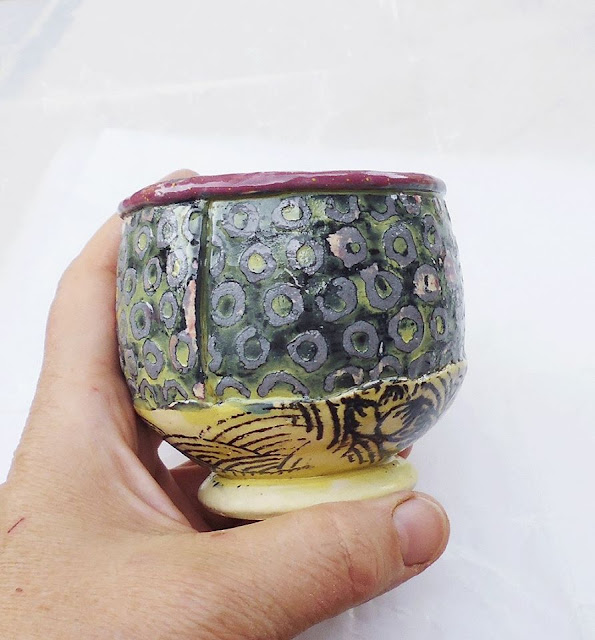 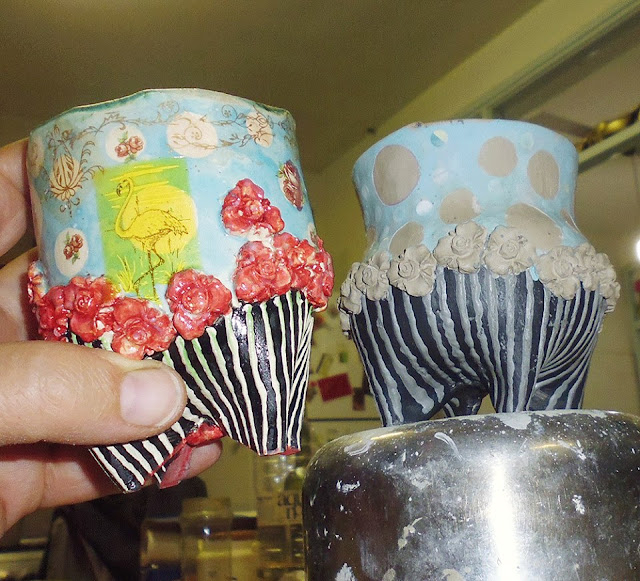 I have forcibly turned every home I ever had into a workspace. My current dwelling place used to be a class room, later a canteen kitchen, and now it is my studio, sewing space, kitchen, bedroom and dog shelter in that order. The kiln is in the garden. It forces me to be reasonably organised and keep my supply shopping binges in check, so i guess it is a good lesson. 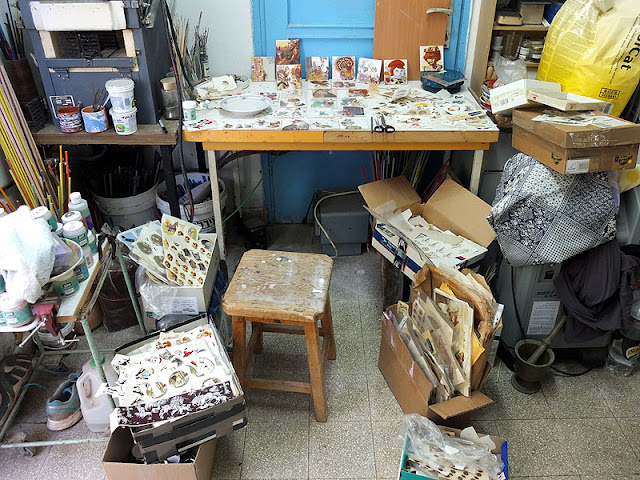 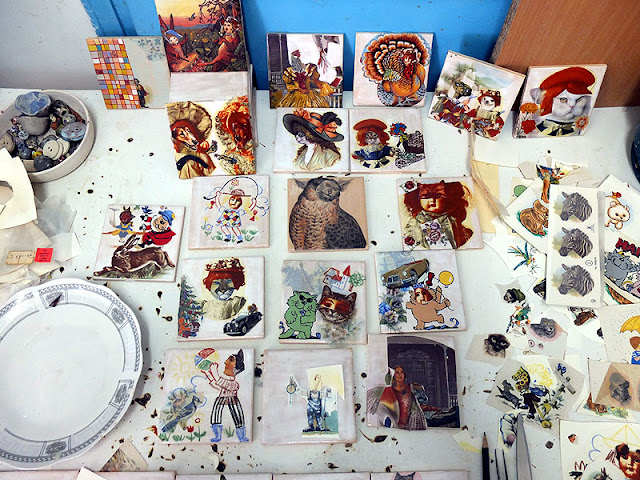 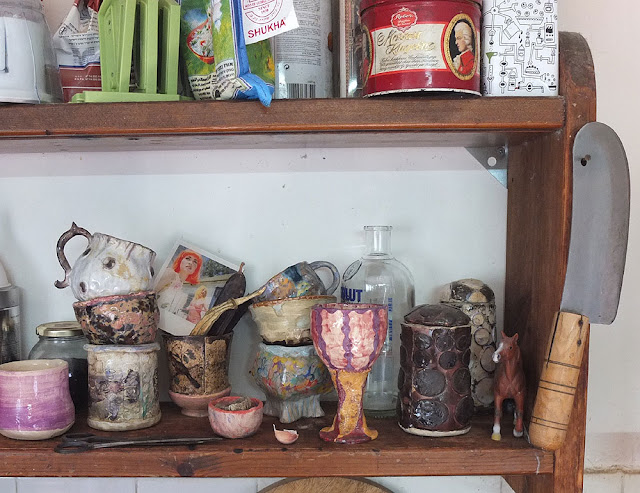 Are there any ceramicists, artists, or bead makers that you’ve found particularly influential or that you particularly admire?

There is one ceramic artist - sadly, I don’t recall her name. (Maybe someone who reads this can help me out.) I really liked her work. It was so unusual and authentic. Simple shapes called ‘cake’ or ‘soap’ glazed with strange structured glazes that could either be highly intricate formulas which took years to develop or something gone wrong in the kiln. It might be as well that I don’t remember her name, in case she were ever to read this.

My favourite artists are my favourites not exclusively for their art but also what they stand for, as far as this is known. The list is long and more are added every week, especially writers as I read a lot. Shall I name a few? The painter Morandi, my sister Franziska Kneidl, Hieronymus Bosch, Lady Gaga, Yohji Yamamoto, Gerhard Richter, Saul Bellow, Rohinton Mistry, Guy Ritchie, the earlier mentioned Beuys, Fabio Moro, gakkinx, Marina Abramovic and the list goes on and on and on. 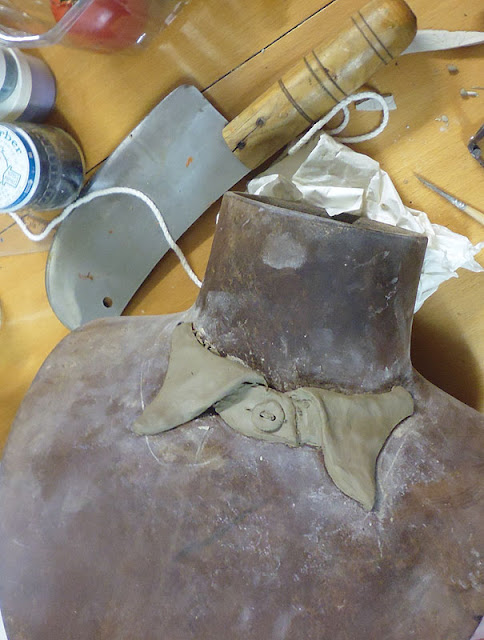 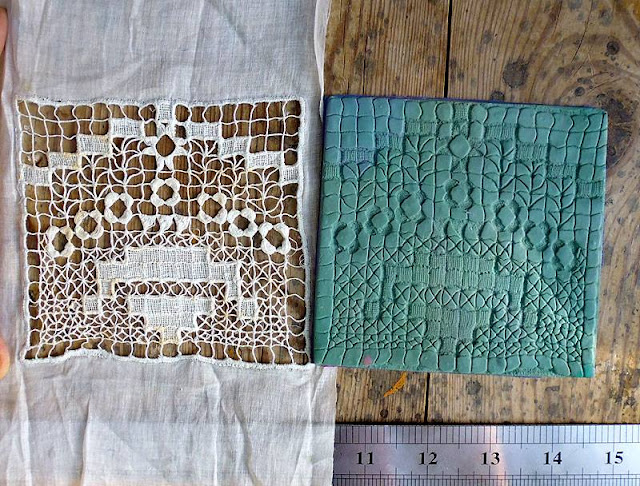 What plans do you have for the future? Where would you like to take your work next?

I am also curious where my work will take me next. Just recently I have discovered overglaze painting which I am excited to try on beads. Making my own glazes is something that has intrigued me so I hope to be doing that, also working with porcelain which I have never done. And then of course there are fabrics to be cut, stitched, painted and assembled. But truth be told I don’t look very far in the future. 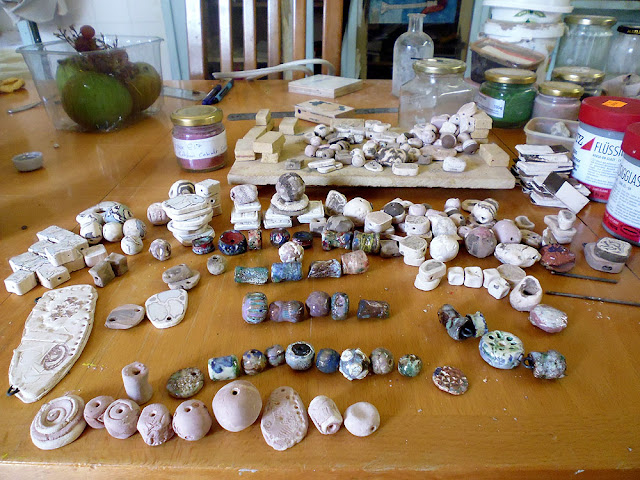 Thank you, Kathrin, for such full and fascinating answers! To see (/shop) Kathrin's work, head this way!

Posted by Claire Lockwood at 2:18 AM

Kathrin is my favourite bead artist...her work is so incredibly creative and original. She is definitely one of a kind!!!

I am on my way to her shop now! What a talent!

Awesome artist thank you for the introduction!